For the past six years, a large cohort of people have retired at 65 to find that they cannot access their State pension until they turn 66. From next year, that gap widens to 67. Video: Enda O'Dowd 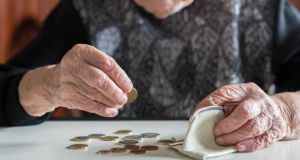 The Government’s intention to increase the age of payment of the State pension from 66 to 67 in 2021 and to 68 in 2028, is giving rise to much discussion as we head for the polls on February 8th.

Some of the commentary is poorly informed, but understandably worry and even anger are being expressed by those most affected – particularly people who are contractually obliged to retire at age 65, or those whose work is so physically demanding that they don’t see how they could continue working until those later ages.

This is a problem that has been brewing for some time, born of demographic trends and a lack of private pension provision. But any policy response that does not raise the age at which we receive the State pension will be very costly.

The problems caused by raising the pension age have been highlighted in reports issued by the Pensions Board, the ESRI, the OECD and others. Proposals to automatically enrol private sector workers into pension schemes are under discussion. They will help in the long run, but are clearly not a short-term solution.

Many don’t remember that the age of payment of State pension was 70 until the early 1970s, when it was reduced progressively to 66, and effectively to 65 by the introduction of a means-tested “Retirement Pension” paid at that age. Latterly called the State Pension (Transition), this was abolished in 2014 as part of the reform programme agreed in the context of the ECB/IMF bailout. That also included the increased payment ages now causing concern,

The rationale for raising the pension age was increased life expectancy – those who reach age 65 in 2020 are likely on average to survive 50 per cent longer than those who hit 65 in 1970.

Our population is ageing over time. In 2018, there were five workers (paying tax and PRSI) for every retiree. By 2050, that figure will be two workers per retiree. Other countries, including France and the UK, are experiencing similar issues and raising pension ages.

The demographic trends give rise to concerns about sustainability – for how long can we afford pensions at their current levels, never mind keeping up with inflation? Most employees pay 4 per cent PRSI. Employers pay 8.8 per cent for employees who earn more than €352 per week, and 11.05 per cent if earnings exceed €386.

I believe most employers would question their continued ability to compete in their markets if these contributions were to rise significantly. And the ageing population also means more demands on the exchequer generally, via the health service and long-term care needs, so the State’s ability to meet the pension bill will be squeezed.

This is aggravated by the fact that most public sector pensions are not funded in advance, but are paid from the current income of the government, local authorities and State agencies.

Much has been made recently of supplementary pensions available to many public sector workers who retire before State pension payment age. These are mainly new entrants who joined the service after April 5th, 1995 and became liable for PRSI on the same basis as private sector workers. Earlier entrants paid modified rates of contribution, but had very limited entitlement to social welfare benefits.

Because the later entrants have their occupational pensions reduced by their State pension entitlements, the intention of the temporary supplementary pension was to bring such people’s total pensions into line with their colleagues who had joined before them.

Many of these “new entrants” were actually re-entrants who had left, perhaps to assume caring responsibilities, and rejoined after breaks in service, often in lower-paid jobs, and have now reached retirement age. Unfortunately, some of the current commentary in this area is misinformed. It is unfair to describe these people as receiving “subsidies”.

In the public service, contractual retirement ages have been made more flexible for most employees, to enable them to stay on until the State pension payment age. Some private sector employers have aligned their scheme rules with the PC payment age, so that changes in scheme rules automatically follow changes in PC rules.

Other employers have met the challenge of the changing payment ages by terminating original contracts of employment at age 65, and issuing new, short-term contracts. Unfortunately, many of these incorporate terms and conditions less attractive than the original contracts.

Given the problems with sustainability, it may not be possible in the long term to avoid increasing the age of payment. Short-term solutions may present themselves in the course of the election campaign, but any short-term solution or combination of them will inevitably mean further demands on the exchequer. If we want decent pensions, we must pay for them.

Paul Kenny is the former Pensions Ombudsman. He is a course leader with the Retirement Planning Council of Ireland and a non-executive director of Trustee Decisions Ltd.

1 UK to close borders to non-English speakers and unskilled workers
2 Jewish council dismayed at Sinn Féin TD’s ‘unacceptable’ tweets
3 I’m worried about my neighbour’s new ‘shed’ and what he intends to use it for
4 A Russian cruiser with ‘cannibal rats’: What other ‘ghost ships’ could be out there?
5 Fine Gael should swallow its pretend humility
Real news has value SUBSCRIBE