A fundamental ingredient in our political culture needs to be changed 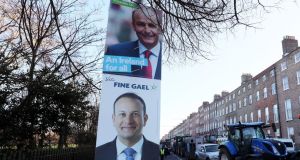 Civility as a civic and political virtue goes a lot deeper than mere politeness and has been in rather short supply for the past three years in the politics of Britain and (with few exceptions) in the politics of Northern Ireland since 1921. It will be interesting to see if the anti-civility pathogen has spread South with an end to the extended Fianna Fáil/Fine Gael handfasting and in the current general election campaign. Photograph: PA

‘Civility costs nothing and is easily carried’, my father used to say. He was talking about ordinary politeness in everyday life, at work, in company and in the home. Perhaps primarily in the home and with the family.

But civility as a civic and political virtue goes a lot deeper than mere politeness and has been in rather short supply for the past three years in the politics of Britain and (with few exceptions) in the politics of Northern Ireland since 1921.

It will be interesting to see if the anti-civility pathogen has spread South with an end to the extended Fianna Fáil/Fine Gael handfasting and in the current general election campaign.

Civility has its limits. It will not eradicate polarisation in politics

As a political virtue civility doesn’t mean being nice all the time, although at heart it is animated by the conviction that your opponent is not your enemy.

In fact, civility is very robust in its approach because it won’t take refuge in easy ad hominem arguments. Even when your opponent’s motives might easily be challenged, civility will first address his or her arguments.

Civility has its limits. It will not eradicate polarisation in politics. Perhaps there was no political player who had a greater respect for civility and whose mode of discourse was more civil than Martin Luther King, yet he was certainly a polarising political figure.

Nor can civility in and of itself provide the sort of inspired leadership which involves the courage, technical skill and wisdom that is needed to break out of the weary maze which has been the daily, monthly and yearly round of political life in Northern Ireland for the past umpteen years.

But it can provide the political atmosphere which will allow arguments to slowly mature and fructify. And by a focus on the argument, not on the person, (or the “tradition” from which they come) a path to such leadership can be found.

Something momentous is happening, for good or ill, across Europe and within the UK. This island will catch some of the down draught. We are at a time between times. And if the times into which we are moving aren’t to become either a simple facsimile of the pages of recent history or descend into something even worse, then some fundamental ingredient in our political culture needs to change and to be changed intentionally.

Civility is an active virtue and needs to be cultivated. Unlike sloth or folly it cannot simply be caught. Think of the gargantuan efforts made by Abraham Lincoln to entrench civility in American political life after the Civil War there.

Or closer to home, the heroic reticence of someone like Seán Lemass in relation to the death of his brother.

All sorts of divides

Civility deepens and enriches human engagement across all sorts of divides, because it carries with it an assurance of respect. Northern Ireland is a very small place with limited human capital. In order for it to prosper it needs to encourage a dialectic of ideas across the whole spectrum of society and an openness to throw ideas into a melting pot and to seriously debate them.

That will be an essential element in moving beyond peace as an absence of violence into something which is potent and fertile; able to conceive and bear its own children.

In other places this function of civil debate is often lubricated by the output of think tanks (even where they are clearly “aligned”). These have been in short supply or short-lived in Northern Ireland.

But we have in our universities academics who are very practised and willing to be engaged in the public sphere and whose expertise is woefully underused.

Academics follow the evidence and push forward new ideas, many of which can be rather discombobulating to practising politicians and civil servants, not to mention churches. And many new ideas do indeed turn out to be vainly faddish or out of proportion to other truths.

But the only way to separate the gold from the dross is through civil engagement. To throw the ideas on to the table and for the debate to take place. Robust and maybe even a bit bruising but such debate all comes within the terms of civility.

The churches have a great deal to learn from civic engagement and debate, not least where we are to locate ourselves within the public space. But, just maybe, we have one or two small things of our own to contribute. Perhaps one of these is the practice which goes under the uncatchy title of “receptive ecumenism”.

This does not seek to persuade the other tradition that they are wrong and that you are right. Instead it is much more like showing one another an album of family photographs – an explanation of heritage and a demonstration of love and common human experience.

It is natural to love one’s own family more than another’s, and one's own family photograph album more than another family’s. Yet oddly enough it is because of this that we might appreciate the love which someone else has for their own family. And in that understanding lies respect and openness.

In Ireland, North and South we have a facility for language. It is easy for us to use, so perhaps it is not unexpected that it should sometimes become facile. Just too easy to think of and express the cutting phrase or the slightly cruel riposte; the ugly sneering put down.

But in a society and in a political culture marked by civility that way of talking to one another would feel as out of place as Donald Trump in Finland.

Or is that a rather uncivil thing to say?