To form any coalition FF and FG will need at least 55 seats, with 80 for a Dáil majority 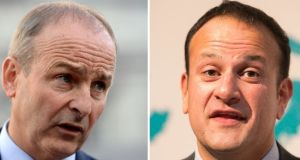 When voters go the poll on February 8th one of the issues they need to consider is that of government formation after their vote is cast and counted.

The abandonment by Fianna Fáil of its mantra of single-party government after the 1989 general election opened the way for it to form governments with the PDs, Labour and the Greens over the following two decades. Perpetual Fianna Fáil-led government with it leading coalitions of differing other parties after each election seemed inherently plausible.

From the time it first entered government in 1932 there was a remarkable consistency to Fianna Fáil’s vote. It was literally guaranteed about 40 per cent of the first preference vote in every election it fought. It even managed to get over 50 per cent twice in 1938 and 1977. When it entered coalition in 1992 and 1997 its vote was at just over 39 per cent.

In every election from 1932, when it entered government for the first time, up to its implosion in 2011 it attracted the largest number of votes and was western Europe’s most successful political machine.

The economic crash changed all that. The year 2011 was the third most volatile election in post-war European democracies precisely because of the collapse of Fianna Fáil.

There have been very few opinion polls ... which have shown Fianna Fáil substantially ahead of Fine Gael

After the first week of campaigning in this election many pundits are very bullish about Fianna Fáil’s chances of a return to the glory years. It is odds on with the bookmakers to win the most seats and many are predicting it will break the 60-seat mark. Less than a decade after being routed by the electorate, amid doubts about its very survival, the holy grail of government now seems within grasp for Ireland’s soldiers of destiny.

Yet there have been very few opinion polls over the last year which have shown Fianna Fáil substantially ahead of Fine Gael. Most polls have either had Fine Gael ahead or the parties relatively level. It is clear that this campaign perhaps more than any other in the state’s history will be crucial to the outcome.

For the first time since the 2007 general election there is a clear contest as to which of the two main parties will win the most seats and who will be taoiseach. Winning the most seats will put either Leo Varadkar or Micheál Martin in the driving seat to form the next government.

The main question is how will they get there. There are three routes; an overall majority, a coalition with one or more parties, or a minority government supported in a confidence and supply arrangement.

The first option is impossible.

The second option comes with grave risks for both parties and their potential partners.

To form any type of coalition government Fianna Fáil and Fine Gael will need a minimum 55 seats. This leaves 25 seats to be found among coalition partners to reach the magical number of 80 for a Dáil majority.

There are several scenarios where this could happen:

There are various problems with this option. The larger the coalition hydra the more difficult it is to form in the first place and to then keep together. Three headed coalitions worked between Fine Gael, Labour and Democratic Left from 1994 to 1997 and between Fianna Fáil, the Greens and the PDs from 2007 to 2011.

It is noticeable that two of these parties no longer exist while of the other two Labour was very badly damaged by its participation in the 2011-16 government and the Greens barely survived their one outing in government.

If history teaches us anything about electoral politics since Fianna Fáil embraced coalition it is that smaller parties should adopt the mantra of caveat emptor. It could well turn out to be the case that Fianna Fáil and Fine Gael will find themselves with no coalition dance partners when it comes to trying to form a government.

Brexit was the glue which held the last Government together

While it is reasonable to suggest that Eamon Ryan and Brendan Howlin desperately want to be in government, there is no guarantee that they could persuade their fellow members and activists to enter coalition given the recent grim history of both parties in office.

That leaves the third option of one of the main parties leading a confidence and supply minority government with the support of the other. Brexit was the glue which held the last Government together. It is difficult to see another such agreement lasting any similar length of time.

In that context the possibility of a return to the instability of the early 1980s when there were three elections in eighteen months looms large. Voters should remember that when they cast their ballots.