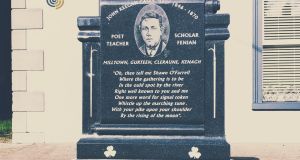 The Polish rebellion of January 1863 against Tsarist Russia was hardly a subject of major concern in this country but a teenager in Longford saw it as an example Ireland should follow. He put his thoughts into a poem titled “A Lesson” and sent it to the nationalist newspaper, The Nation, over the nom-de-plume “Leo”. It was accepted by the editor, AM Sullivan, and it appeared on February 28th.

“Leo” was John Casey who was born at Mount Dalton, near Mullingar, Co Westmeath, on August 22nd,1846, the first of three children of Luke Casey, a teacher, and Margaret Keegan.

In later life, he signed himself John K Casey out of respect for his mother.

When he was nine, the family moved to Gurteen, near Ballymahon, Co Longford, where Luke had obtained a post as teacher in the local school.

Five years later, John became his father’s assistant, and his informal training, which was common among Catholics at the time, made him eligible to teach briefly in schools in nearby Cleraune and Kenagh.

But in the autumn of 1865 he abandoned teaching and became the agent of a flour-milling company, Murtagh Brothers, in Castlerea, Co Roscommon.

Meantime, he had become a regular contributor to The Nation, and on Christmas Eve, 1864, it published his most famous poem, The Rising of the Moon, a tribute to the insurgents who had assembled at Skeagh Hill, near Rathconrath, Co Longford in September 1798.

His first book of verse, A Wreath of Shamrocks, was published in Dublin in 1866. An expanded collection, The Rising of the Moon and Other Ballads, followed in 1869, and the London Review, a conservative newspaper, commented that “no Saxon could feel over-vexed at being railed at so eloquently in his own language”.

A third collection, Reliques of John K Casey, compiled by a fellow poet, Eugene Davis, was published in 1878 and some of his songs were printed on handbills and sold at fairs by travelling ballad singers.

In all more than 200 of his compositions, including poems with historical themes like St Killian, about an Irish missionary in Germany, patriotic ballads like Carroll Bawn, and love songs, like Máire My Girl and Mo Cailín Ruadh, were published.

His work brought him to the attention of John O’Leary, the Fenian, who offered him a job with the Irish People newspaper. The invitation came at an opportune time as he was recovering from a failed romance in Longford and he moved to Dublin at the end of 1866.

Casey was known to the authorities because of his verse and although they didn’t have first -hand information about his work as an organiser for the Fenians in Ballymahon, he was interned in Mountjoy Prison in March 1867, on suspicion of inciting others to rebellion and high treason.

Conditions in Mountjoy were harsh: there was no heating, the food was bad and prisoners were in solitary confinement for 20 hours each day.

As a result, a number suffered mental breakdowns.

Casey appeared to have escaped unscathed when he was released in November but it is likely that his constitution was weakened, with tragic consequences later.

One consolation during his time in prison was the exchange of letters with Mary Josephine Briscoe, the daughter of a Castlerea merchant, who had met him after she had written to congratulate him on his poetry. They married in St Mary’s Pro-Cathedral in Dublin on January 18th, 1868, and he resumed his work as a journalist and also as a lecturer on Irish literature.

During the general election campaign in November 1868, he also joined forces with a fiery Augustinian priest, James Anderson, in a successful campaign to oust the outgoing member in Dungarvan, Charles Robert Barry QC, a leading prosecutor of Fenians.

On March 10th, 1870, he was thrown from a cab when it collided with a dray car on Aston Quay in Dublin and suffered a punctured lung. Next day, he collapsed on Carlisle (O’Connell) Bridge and was taken home to his wife in nearby Summerhill where he fell into a coma. He revived briefly on St Patrick’s Day but died a few hours later.

In 1861, the IRB had organised a huge funeral for another Fenian, Terence Bellew McManus, and Casey’s death gave them the opportunity for a similar event on Sunday, March 20th. His coffin was draped in silk banners of green white and orange, the first recorded use of a tricolour for this purpose, and thousands of people marched in a procession from his home to Glasnevin Cemetery. A Celtic cross was erected over his grave by the Young Ireland Society, a debating club, on November 22nd, 1885.

The Rising of the Moon, became part of the canon of patriotic ballads and Máire My Girl has been recorded by a number of singers, including John McCormack, Richard Tauber and John Locke.

Mary Josephine did not remarry and survived him for more than 50 years. She died on September 17th, 1922, in a nursing home in Dublin.