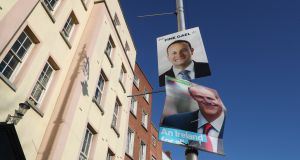 “Fianna Fáil’s campaign isn’t just similar to 2016; it’s actually using the same slogan . . . like Fine Gael, it will need more than that if it’s going to win.” Photograph: Nick Bradshaw

Generals, they say, always fight the last war. Fine Gael and Fianna Fáil seem to have taken this cautionary aphorism as actionable advice, because so far both parties are basically running a version of their 2016 election campaigns.

Fine Gael’s central message so far has been about the economy. The party is not unaware of voter concern about public services and housing and understands the evident belief among many voters that the government – whatever its make-up – needs to do more to tackle housing shortages and emergency-department chaos. But its strategy in the early phase has been to emphasise its economic record and contrast that with its rivals’ last experience in government. Necessary, I think, but not sufficient.

Fianna Fáil’s campaign isn’t just similar to 2016; it’s actually using the same slogan. But like Fine Gael, it will need more than that if it’s going to win

Fine Gael promises to use the fruits of economic growth to address social needs. Sound familiar? Maybe it isn’t exactly “Let’s keep the recovery going”; but it’s a first cousin. Now that we’ve sorted the economy, the party says, let’s get cracking on public services. Even voters who pay little attention to politics might wonder if they haven’t heard that before. Some of them might wonder: what have you been up to for the last four years?

Leo Varadkar understands that elections are about the future and his clumsy campaign slogan reflects this. But much of what the party has spent the last five days talking about has been in the past – albeit Fianna Fáil’s past, not Fine Gael’s.

To be clear, Brexit helps. Paschal Donohoe’s plausible reclamation of the jumper (if not yet the mantle) of economic prudence for Fine Gael helps. But to make bankable progress Fine Gael will have to win the argument about the future, not the past. I expect the party will pivot towards that goal in the coming days.

Fine Gael’s request – for a third term in office – is one that voters rarely grant. The last time they did so was in 2007, and that happened only with a late swing against the alternative. Privately, senior Fine Gael figures plan for the same. They expect to be behind in the forthcoming round of polls, and haul Fianna Fáil back in the final days of the campaign.

Across town, Fianna Fáil is alive to the danger. But it has its eye on the lessons of the last election, when Micheál Martin’s championing of public services led to a doubling of the party’s seats and re-established its place at the centre of Irish politics. Fianna Fáil’s campaign isn’t just similar to 2016; it’s actually using the same slogan. Noises from the campaign trail suggest it is happy enough with progress so far. But like Fine Gael, it will need more than that if it’s going to win.

The mad scramble of the first few days of campaigning will ease this weekend and next week is likely to be more policy-heavy than the skirmishing of recent days. The big two will dominate again, but the small parties will also strain to get their message out. But that’s a double-edged sword – coverage entails critical analysis. Many of the small parties’ policy proposals will crumble once they are properly scrutinised.

That may not be confined to the smaller parties, of course. There is an appetite for investment in public services and for paying less tax. There always is. But this is also a country that has been scarred by the confluence of reckless government and economic misfortune. Promising free stuff, giveaways and unending public munificence might well win some votes. It is also likely to make a lot of voters very nervous about the credentials of those doing the promising.

The other development to watch out for in the coming days is the first opinion polls of the campaign, likely in the Sunday papers tomorrow and followed by others during the week. These will give a read on the standings in the horse race but they will also signpost towards the realm of the possible when it comes to government formation after the election.

That in turn will require the big two parties and the smaller parties to spell out what they would be prepared to do – and what they wouldn’t – after the election. Party leaders hate this “coalitionology” because they want to keep their options open, but it’s an important part of the choice facing voters. And they have a right to know where everyone stands. After all, what the next government does depends rather a lot on who is in it.

The early days have suggested that voters are faced with three broad choices. The first is to stick with Fine Gael as the leaders of the next government, however it is then constituted. To usher them towards this choice, Fine Gael will acknowledge that they haven’t got everything right, but they’ve made a reasonable fist of things, they promise to do better, and anyway, the alternatives are completely untrustworthy.

The second choice is to make Fianna Fáil the largest party, and thus ensure they will lead the next government. Micheál Martin will offer change – always a popular option for voters – but not too much change, mind. A bit of change. Irish change.

The third choice is a radical break with the past, as represented by much of the non-Fianna Fáil opposition. This choice won’t lead the next government. But it will influence it greatly.

The interplay of these three choices will decide the future of this election and the formation of the government that follows it. Right now the outcome of both looks completely open.

* One thing we’ve missed in the first week of the campaign has been the voice of the late Noel Whelan, pronouncing on numbers, identifying trends, criticising political strategies and making bold predictions. He would have been in his element. The public’s understanding of this election is the poorer for his absence.

1 Bank leaked my loan request to family who tried to rip me off
2 Why Sinn Féin will not call the State by its name
3 A cardiac problem that could strike at any time
4 McDonald rejects idea SF public meetings ‘an affront to democracy’
5 Costa living: ‘Move home to Ireland? I’d hate it’
Real news has value SUBSCRIBE