His imperious manner and lack of emotional intelligence make him vulnerable 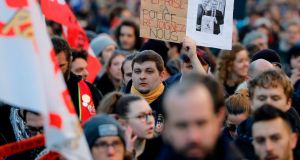 Protesters holds a placard during a demonstration against the French government’s plan to overhaul the country’s retirement system in Paris, on February 6, 2020. - Protesters took to the streets in a ninth inter-professional day of strikes and demonstrations since early December 2019 against the French government’s pensions overhaul. (Photo by THOMAS SAMSON/AFP via Getty Images)

Emmanuel Macron has just passed the halfway mark of his presidential term and France’s metropolitan elites are already falling to despair about the next election. The omens, they say, are far from encouraging. As elegantly as he dances on the global stage, he is no longer applauded at home. Mr Macron could lose in 2022. Dangerously, the far-right Marine Le Pen could win the Elysée.

Now that would be a political earthquake. The shockwaves would be felt well beyond the borders of France. Whenever I am in Berlin I hear complaints about the French president’s habit of seizing the agenda. But Germany cannot afford to see Mr Macron lose. That would damage German as well as French ambitions for a Europe that holds its own amid great power rivalry between the US and China.

Visitors to France should always remember that it is rarely cheerful about itself. That said, the present mood seems particularly dyspeptic. The gilets jaunes protests, essentially about the careless disregard shown by metropolitan France for small provincial towns, have shrunk. Yet deep resentments linger. They are overlaid with union anger at the reform of the public realm.

Strikes against plans to modernise a costly and byzantine pension system are set to enter a third month. Until recently, Paris was gridlocked by strikes on the railway and subway systems. Teachers, nurses and lawyers have joined the protests. Blockades of incinerators see rubbish piled in the streets.

Mr Macron can probably ride out such action. The numbers are getting smaller. Government concessions have defused the opposition of some moderate unionists. But if Mr Macron can win, at what price? The strikes have halted the upturn in growth that had set unemployment on a downward trend for the first time in more than a decade.

The president’s approval ratings have fallen to the low thirties. Taking a run of polls back to 1980, only François Hollande, Mr Macron’s ill-starred Socialist predecessor, had consistently lower scores during his first two years. There has been a collapse of trust. More than three quarters of those polled believe that a pensions overhaul is overdue. But more than half support the strikes.

La République en Marche, the movement created by Mr Macron in 2017, is likely to be trounced in next month’s municipal elections. A dispute over its choice of candidate means the ruling party may lose even in Paris, where Mr Macron secured 90 per cent support in 2017.

Many of the criticisms of Mr Macron focus on style more than substance. The reforms of the employment market, tax, education, training and latterly pensions that he made his political mission have antecedents in the efforts of previous governments of left and right. What raises concern is his imperious manner, his lack of emotional intelligence and the sense he is out of touch.

Behind such critiques lie the real fractures in French society - between the big cities and provincial towns and between insiders and outsiders in the labour market. In a curious way, Mr Macron has mapped Ms Le Pen’s path to the Elysée. He laid waste to the traditional parties of right and left in 2017 after framing the presidential contest as between progressive, pro-Europeanism and reactionary nationalism. Neither the Republicans nor Socialists have recovered from the shock. But Ms Le Pen can redraw the line as one between “globalism” and nationalism. This is a fight she thinks she can win.

The president’s allies admit that he has haemorrhaged support among erstwhile Socialist voters who fear the destruction of France’s unique social contract. The changes to the pension system are actually progressive - they shift benefits from those with entrenched advantages - train drivers, say, who retire at 50 - to those on low wages in precarious jobs. Yet Mr Macron has done little to counter the populist narrative that the reforms represent the march of neoliberalism.

Ms Le Pen has sanitised her Rassemblement National. It now presents itself as the standard-bearer of tradition and stability. She has shed some of the more extreme positions of her father, the party’s founder Jean-Marie Le Pen. Associations with Vichy and virulent anti-Semitism have faded with the passing of her father’s generation, if only to be replaced by Islamophobia. Hostility to the euro and the EU has been tempered. The party, she claimed in a recent interview with the Financial Times, is now “profoundly reasonable and pragmatic”.

In truth it is anything but. Voters angry with the status quo, however, may not look too closely. Ms Le Pen has drawn support both from the gilets jaunes and from hard-left backers of the populist Jean-Luc Mélenchon. She is targeting a broader span of left-leaning voters. The UK Conservative prime minister Boris Johnson’s success in winning over lifetime Labour supporters in December’s British election is part of the model. A similar shift in France would probably put Ms Le Pen in the Elysée.

To my mind it is much too soon to despair of Mr Macron’s prospects. Those now predicting his demise were often wrong in 2017 about his capacity to break the old system. The president will seek to lure the traditional right as well as a sizeable part of the old left. But if not despair, then beware. Mr Macron has been right on his prescriptions for France; and wrong in the way he has administered them.

Philip Stephens is a columnists with the Financial Times