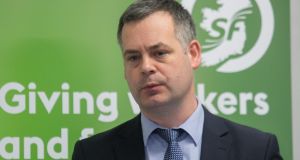 A dam has blown up. The precise ignition point is debatable but the sparks that flared over Leinster House last July must be in the reckoning. That was when the turgid Oireachtas finance committee became The Pearse Doherty Show.

In December, Miriam Lord dubbed him Politician of the Year.

The point about Pearse Doherty is that if he didn’t exist, Sinn Féin would have to invent him. That is, if we believe the kind of vacuous labelling being hurled around.

Micheál Martin was on the same hymn sheet, telling the Sunday Independent that the difference between Fianna Fáil and Fine Gael is not about policy but class

Ivan Yates’s dismissal of all seven party leaders as “chancers and charlatans” on an importantly timed debate was startlingly irresponsible. He followed that in a weekend interview with a reference to Fine Gael “posh boys”. The context was his theory of how “as part of their arrogant submerging of vanity”, the posh boys might approach coalition with Sinn Féin.

The term “posh boys” has been resurrected in recent years to reflect the theory that Brexit is rooted in the power of British public schools; ie filthy-rich parents and an Eton education. In Irish social media, it’s just a term of derision for Fine Gaelers.

While Yates’s attempts to sever his record from the old FG mothership – government minister, eight-time general election candidate – is entertaining, it’s a tricky one.

If “posh boy” in his book means leafy upbringing plus private school equals something aloof and arrogant, then few can level up to his attendance at Aravon, a privileged old prep school followed by St Columba’s (current boarding fees about €20,000).

Meanwhile, Micheál Martin was on the same hymn sheet, telling the Sunday Independent that the difference between Fianna Fáil and Fine Gael is not about policy but class. “My father was a bus driver. My parents never had an education.” Fine Gael, he said, “come from a more privileged background and they never really had that feel for working-class people.”

In fact, the great majority of that generation had minimal education but it’s a bold argument to square with a nation’s box-fresh memories of Charles Haughey’s taste for Charvet shirts, Gandon mansions and mohair suits while he injuncted the sans-culottes to tighten their belts.

But it drew out FG’s Simon Harris, who retorted that he was the son of a taxi driver and an SNA and Noel Rock who said he was raised by a single mother in the Ballymun flats.

So where does Pearse Doherty feature and why is he important to the Sinn Féin narrative?

Prominent spokesman Eoin Ó Broin attended Blackrock College and two universities and openly tweets the kind of cool foodie ideas that would have FG’s Eoghan Murphy run out of town.

No doubt they all have unique backstories to explain decisions taken by their parents. Some probably entailed great sacrifice. But let the facts be acknowledged at least. No one would be foolish enough to deny we have a class problem, but let’s be clear about the reference points when we slap on labels.

So where does Pearse Doherty feature and why is he important to the Sinn Féin narrative? His parents Michael and Gráinne lived through the era of the hiring fairs. Grainne was barely nine when sent to work for another family. Pearse and his five siblings were reared in a one-bedroom house in a Glasgow close.

He never completed a DIT engineering degree course and has an entirely self-taught financial brain.

While putting some technical training into practice around Dublin building sites as a youth, the phone call that changed his life came from Pat Doherty, a well-known Sinn Féin and abstentionist Westminster MP once named under parliamentary privilege as a member of the IRA army council.

Out of that call came a commitment to go home to Donegal with the task of helping to build Sinn Féin, parish by parish.

Yet there was nothing preordained about the politics. Back in Donegal, his father canvassed for Fianna Fáil while Gráinne supported Fine Gael. Their son’s conversion to Sinn Féin was about ballads of fallen heroes, Bobby Sands and the fact that his parents couldn’t get a council house.

“So maybe the republicanism was a more romantic idea and then grew into something that was a lot more, that – yeah – had a socialist edge to it. But I call it just fairness. It’s about fair play,” he told me during a drive around his native Gaoth Dobhair a few years ago.

It revealed a likeable, highly practical man, thoughtful and forward-looking yet one who is always looking back, framing life through the filter of the Fenian dead. There is no sign of bitterness. He exemplifies the modern Sinn Féin narrative, without the bloody baggage.

Whoever forms the next government will be luckier than Fine Gael and Labour who accepted chalices of arsenic. This time, there is extra cash in the treasury and an element of stability. Pearse Doherty may well be in cabinet.

It promises to be a fascinating ride.