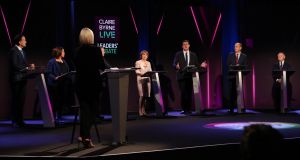 ‘There is almost no discussion of the risks to the growth outlook and how parties would respond if things go wrong.’ Photograph: Niall Carson/PA Wire

Elections are about choices. A party’s manifesto provides the most comprehensive statement of the set of choices underlying their platform for the coming election. But the ways in which manifestos are presented do a disservice to voters struggling to decide between competing offerings. We can do better.

A positive feature of this election is that most of the major parties have stuck to €11 billion as the envelope for new spending increases and tax cuts. As identified by the Department of Finance, this envelope is consistent with maintaining a modest budget surplus given the central scenario for economic growth for the period to 2025.

But the way manifestos are presented sows confusion. There is almost no discussion of the risks to the growth outlook and how parties would respond if things go wrong. And there is insufficient recognition of the amount of spending that would be required just to maintain current levels of public services and inflation-adjusted social protection benefits.

Different presentational approaches have been taken by the different parties in their recently published manifestos. Fine Gael provides limited costings of individual measures but provides useful year-by-year summaries of the overall spending and tax packages. Fianna Fáil provides detailed costings, but almost no analysis of the overall package. Labour and the Greens present only limited costings in their manifestos.

Sinn Féin’s manifesto has probably received the most comment. The party proposes a €22 billion spending hike and a net tax increase of €1.4 billion. But the projected budget surplus is just €2.3 billion below that projected by the Department of Finance for 2025 based on an €11 billion package. This must have left many voters scratching their heads. The explanation appears to be that much of Sinn Féin’s increase in capital spending is temporary. If true, this capital spending would increase the projected path of Ireland’s already high debt, but the assumption is that it would disappear from the budget in 2025. These are, of course, valid spending and taxation choices – but voters would benefit from greater clarity and standardisation of presentation from all the parties.

The manifestos do not consider risks to the baseline scenario provided by the Department of Finance. Obvious risks surround global growth prospects, the final form of Brexit and the sustainability of corporation tax receipts.

The most pressing clearest uncertainty is the nature of the post-Brexit trade deal between the EU and the UK. It has been said that we are only at half-time on Brexit. From an economic perspective, it is likely that we are well short of half. Trade deals take a long time to negotiate and the impacts of any new barriers to trade will be long-lasting. There is also a continuing risk of a hard Brexit by the end of the year if the trade talks fail and the transition period is not extended.

More informative manifestos would include analyses of the impacts of different growth scenarios on the available resources, complemented by an outline of how the different spending and tax measures proposed would be prioritised.

For future elections, serious consideration should be given to Dutch-style costing of election manifestos

An essential piece of information missing from the manifestos is an a comprehensive estimate of the additional spending required just to “standstill” in terms of public services and inflation-adjusted benefit levels. An ageing population will mean more medical spending simply due to the extra people showing up for treatment. Likewise, rising prices will put pressure on public sector pay and welfare bills.

The Department of Finance does factor in €500 million per year in demographic-related costs in calculating the €11 billion of unallocated resources. But the identification of demographically sensitive spending is incomplete and no allowance is made for rising costs of provision beyond the existing Public Service Stability Agreement on pay.

A comprehensive standstill estimate – similar to the ones undertaken by the Fiscal Advisory Council – requires detailed demographic projections for different age cohorts and technical assumptions about how such variables as public-sector pay and social protection benefits will evolve with broader wages and prices in the economy.

These technical assumptions are not prescriptions or opening bargaining positions. Rather, they help identify the resources that are available for new measures while maintaining existing provision. Of course, parties are free to deviate from these assumptions – e.g. under or over indexing of benefits for inflation – based on their priorities.

For future elections, serious consideration should be given to Dutch-style costing of election manifestos and programmes for government. Such costing has taken place in the Netherlands since 1986. For the general election in 2017, the CPB, the highly respected independent body that produces the costings, published a report “Charted Choices, 2018-2021” that allowed for easy comparisons across the parties competing in the election. Australia, Belgium, Canada and Lithuania have also now adopted elements of the Dutch approach.

In Ireland the Parliamentary Budget Office would be an obvious choice to lead this complex effort, possibly supported by Government departments and other independent bodies such as the Fiscal Advisory Council and the Economic and Social Research Institute. Drawing on best international practice, significant planning would be required to produce a costing system suitable for Irish elections.

As things stand, voters are poorly served by the difficult to verify claims and counter claims about platforms that characterise Irish election campaigns. Having fallen foul of poor decisions on spending and taxation in the past, Irish voters should demand better costings and better manifestos. This would empower them to make more informed choices and would help avoid a repeat of past mistakes.

John McHale is Executive Dean of the College of Business, Public Policy and Law and Professor of Economics at the National University of Ireland Galway. He is a former chair of the Fiscal Advisory Council.