How Johnson will get his Brexit deal 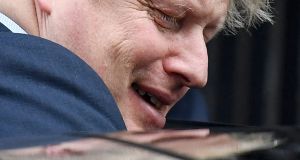 Britain’s Prime Minister Boris Johnson leaves 10 Downing Street in central London on February 5, 2020, to take part in Prime Minister’s Questions (PMQs) at the House of Commons - the first since Britain officially left the EU on January 31. (Photo by DANIEL LEAL-OLIVAS/AFP via Getty Images)

Boris Johnson will strike a comprehensive free trade agreement with the EU this year and the deal will be better than any other politically feasible option.

This is a bold and, perhaps, reckless prediction, coming in the week the UK prime minister wrapped himself in the Union Flag, coined a new euphemism for no deal (“Australia”) and set out a vision designed to irritate Brussels and appeal to nationalist British sentiments. But the start of a new negotiation is the time to overlook the crass “Rule Britannia” symbolism, ignore what Mr Johnson sounded like he was promising and, instead, read what he actually said.

It is easy to disagree with London’s fundamental position in the second stage of the Brexit negotiations, but, for once the stance is clear. The government does not want to take back control from the EU, it wants the right to do so. It has accepted Britain will pay an economic price for this privilege, but knows the costs will be difficult to identify even decades into the future.

London has made the decision to erect trade barriers with the EU, take the pain and hope voters will overlook the results. Since Mr Johnson has so often rejected any closer relationship, this is the best deal available.

So, when Sajid Javid, chancellor, tells companies they will need to “adjust” because “we will not be a rule taker”, this is perfectly consistent with saying a few days later the UK will not change regulations “for the sake of divergence”. It might seem odd for government to add cost and inefficiencies for no policy purpose, but we need to recognise this is the real meaning of Brexit.

Take a look at the prime minister’s speech. Mr Johnson’s big request is for an agreement “similar to Canada’s”. Note that he is not asking for the same deal, which would be unacceptable to the EU. Similar is a flexible word.

The specifics follow the same pattern. The prime minister’s most aggressive passage appeared to reject the European Commission’s insistence on “level playing field” clauses in any future agreement. These are designed to prevent the UK undermining the EU single market by operating as an offshore tax haven with companies benefiting from lax environmental rules, shoddy labour standards and subsidises.

With a flourish, Mr Johnson denied the UK would follow such a route and added: “There is no need for a free trade agreement to involve accepting EU rules on competition policy, subsidies, social protection, the environment, or anything similar, any more than the EU should be obliged to accept UK rules.”

The details here matter. The EU’s request for level playing field clauses on social protection and the environment merely request that the UK does not relax its current standards below the EU minimum levels, so it is not asking Britain to accept EU rules. UK laws will be made in the UK, just as they are now.

On tax, the EU already has barely any control over its members’ rates and still won’t in the future. It just wants Britain to keep abiding by OECD protocols on the matter, which is not a demand London will find troublesome.

The state aid proposals are more complex because, in this area, the EU is asking for its rules to apply in Britain. To avoid what could become an impasse, an obvious compromise would be for the UK to reject having to follow EU rules automatically but Brussels then being able to apply immediate trade sanctions if Britain followed another path. It is a simple quid pro quo. Britain will have the sovereignty to depart from EU norms, but knows it would pay a price if it exercises that right.

It appears that a combination of hard words alongside fudged reality even applies to the vexed issue of fish. Mr Johnson insisted that any trade agreement recognise “the fact that the UK will be an independent coastal state at the end of this year 2020, controlling our own waters”. The EU does not dispute the UK’s territorial hold over its waters and included that fact in last October’s political declaration.

Mr Johnson regularly appears to be threatening the EU, when in fact he is just reading out agreements already struck in martial tones. The battles Mr Johnson chose to fight this week sounded blood-curdling, but are either fights against an army of straw men or battles in areas where a path towards compromise seems likely to be found.

Rhetoric makes the news. It matters. And it suits both sides to appear far apart for now. But the substance of what they said suggests an agreement “similar” to Canada’s is possible and likely.

I think it will get done. But I will be equally sceptical of any accompanying claims that it’s a good deal for Britain’s economy.

Chris Giles is economics editor of the Financial Times

1 Ireland has strategy to ‘break the chains’ of coronavirus - WHO’s Mike Ryan
2 ‘Everyone still thinks it’s a joke’ - parents of toddler with coronavirus speak out
3 Miriam Lord: You cannot cocoon democracy – or can you?
4 Cheltenham faces criticism after racegoers suffer Covid-19 symptoms
5 Are holidays booked for July and August going to happen?
Real news has value SUBSCRIBE