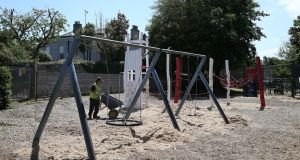 Children are good, regardless of what the bean-counters might say. And women know this. Photograph: Nick Bradshaw

It is not fashionable to say so any longer, but there is much to be said in favour of large families.

The modern tendency – even when it comes to children, and certainly to their number – is towards utilitarianism: to weigh and measure the pros and cons before it can be said that anything is “good”. I prefer to start from first principles. My first principle is that all babies are blessings to their parents.

So I don’t much care whether, in weighing the euro and cent, or even the carbon credits, the utilitarian scales tip in favour of or against children. Children are good, regardless of what the bean-counters might say. And women know this.

A recent report by the OECD which points to “barriers in family formation” indicates that Irish women aged 25-39 are having fewer babies than they would like. The desired rate is 2.74; the actual rate is only 1.66. Less than 1 per cent of women stated that they wanted no children. Under 3 per cent wanted just one child; almost 34 per cent wanted two children; while the biggest group – 43 per cent – wanted three or more children. Some 19 per cent said that they did not have an ideal number of children or didn’t know how many they would like.

Where are we going wrong then, when so many young women are not having the children they desire? Let’s take a look at our culture.

Where are we going wrong then, when so many young women are not having the children they desire?

Alarmist predictions of Armageddon in the face of a rising world population have been circulating since at least the late 1960s, when The Population Bomb was published with its neo-Malthusian advocacy for contraception, abortion and even enforced sterilisation.

Its author, Paul Ehrlich, predicted “mass starvation” and a “dying planet” yet global food supplies have managed to keep pace with, and even outpace, population growth since then.

The attitude presented in that book has become deeply embedded in governmental policies worldwide: our own government is pumping millions into schemes to dissuade people from having children. There is talk of ever more taxpayer-funded contraception to prevent babies from being conceived; taxpayer-funded abortion is promoted to prevent babies from being born; and the Health Service Executive has now taken to advising people to have online “sex” – if that’s what you can call it – to prevent anyone from getting close enough to even think about having a baby.

In fact, we are now facing a different kind of challenge: a rapidly falling birth rate worldwide. Our own fertility rate is below replacement level. This has huge ramifications for the young, who will have to work in fewer numbers to pay for the needs of a greater number of older, retired people. The old will increasingly come to be seen as burdens, while the young will be saddled with impossible tax obligations. Unless and until something is done to reverse this trend, the quality of life for future generations is bleak. Certainly, it will be fertile ground for population control focused at least as much on the end of life as its beginning. Non-voluntary euthanasia for the non-productive may not be as far-fetched as you might think.

There is now widespread acceptance that children are environmentally – and therefore morally – problematic. Even if there was an environmental cost to children, it would be worth paying. But larger family units have their environmental advantages. Economies of scale mean that the amount of energy used per person in a multiperson household is far less than that used by a person living alone.

The model of a large family sharing a dwelling becomes even more efficient in an inter-generational model of housing. But our planning laws militate against this possibility, with many rural families who would welcome a younger generation living on the same land prevented from doing so. Young families, who would happily live with their parents or parents-in-law, providing all kinds of social and inter-generational benefits, are instead cast out into an already over-pressurised market to compete with other couples, pushing up prices for all.

What we see instead is a proliferation of smaller dwellings to accommodate an increasingly atomised society. In the past, many planning authorities restricted the number of single-bedroom units that could be constructed in a development. Since 2018, government guidelines on building height and density allow for these restrictions to be set aside, in order to accommodate greater numbers of people living alone.

Affordable housing is out of reach for too many families, and many – especially larger families – are in effect excluded from the rental market because so few landlords are willing to rent to a family with more than a couple of children. In the recession that is likely to follow the lockdown, an increasing number of these families will be operating on single incomes – if they are lucky. Apart from job losses, other parents may have to give up work to make sure their children are cared for and educated at home, with the continued uncertainty of schools reopening at full capacity. And many will find – to their surprise – that, as single-income families, they will suffer further punishment by a tax system that treats them less favourably than double-income couples.

Perhaps it’s the housing shortage, perhaps it’s the perceived lack of affordability of having children, perhaps it’s due to people marrying at a later age (if at all), or the now commonly held belief that it is damaging to the environment to have children, but one thing is for certain: it would be better if women were having as many babies as they would like.

Any society that perceives children as a burden rather than a blessing is a sick society with no future. Our policies should be family-friendly. Here are a few suggestions for our new government: get rid of tax individualisation; change the planning laws; encourage marriage and having babies – with tax incentives if necessary. Stop spending taxpayers’ money on measures to prevent babies from being born and start spending it on proper healthcare, education and housing for families.

1 Boris Johnson: The UK’s new Covid restrictions to last ‘perhaps six months’
2 Further restrictions expected for Dublin if Covid-19 infection rate does not stablilise
3 Deported man says he has lived in airport for months
4 Ten new advisers to junior ministers to be appointed despite previous Government decision
5 Why are men still explaining things to women?
Real news has value SUBSCRIBE