A look at the career of Joe Biden's running mate for the US presidential election, Kamala Harris, the first black woman and the first person of Indian descent to be nominated for US national office by one of the country's major parties. Video: NYT 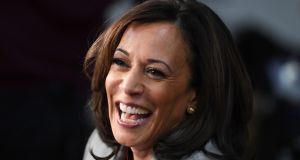 California senator Kamala Harris, whom Joe Biden has chosen as his running mate on the Democratic ticket for the November presidential election. Photograph: Saul Loeb/AFP via Getty Images

‘There was a little girl in California who was part of the second class to integrate her public schools and she was bussed to school every day... That little girl was me.” Kamala Harris’s blistering attack on Joe Biden’s one-time opposition to compulsory school integration during the Democratic presidential primary debate 14 months ago lifted her candidacy briefly to the front of the field. And, many thought, made her a most unlikely partner for a clearly hurt eventual winner, Biden. On Tuesday he announced that the black California senator will be his vice-presidential running mate.

“It is a measure of these extraordinary times that Joe Biden’s historic choice for vice-president was also the most conventional,” former Obama adviser David Axelrod observed. The challenge, on which Biden has focussed laser-like, is to present a safe ticket that energises the party base without frightening the centre ground, a steady-as-she-goes campaign relying above all on the incumbent in the White House further alienating the electorate. Stopping Trump remains the mantra, and was the main reason for Biden’s primary success against Bernie Sanders.

Harris (55) undoubtedly brings those qualities. She would be the first woman VP and the first black person in the role. Harris is a charismatic, gutsy and telegenic politician, and as former California prosecutor and US senator, brings weighty political experience. She is not the polarising figure Hillary Clinton was. And her run for the Democratic nomination means Harris has been publicly vetted, unearthing no damaging skeletons from her past.

Her candidature will disappoint many on the ascendant left of the Democratic Party who might have expected Biden’s long-predicted pick of a woman to favour a candidate like Massachusetts Senator Elizabeth Warren. Harris’s time as California attorney general has left her vulnerable to criticism that she was not tough enough on wayward police officers, but her centrism will certainly make Trump’s red scare tactics less credible. She is also reported to have strong links with the Democratic Party’s fundraising base.

“She is proof that Joe Biden is an empty shell being filled with the extreme agenda of the radicals on the left,” the Trump camp blustered implausibly after the announcement. It referred sneeringly to her as Biden’s “political living will”, a less-than-alarming allusion to the fact he will be the oldest elected president and that she would be a “heartbeat away” from office.

Just as significantly, the widespread presumption that Biden would only wish to serve one term means that Harris is now front of the queue and ideally placed to prepare another run for 2024.

Next week’s Democratic National Convention will see the ticket unanimously endorsed. Trump has every reason to feel jittery.