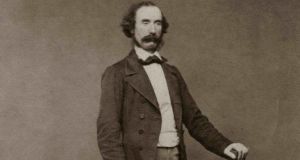 Robert Mallet: honed his skills with explosives in a series of skirmishes with local “roughs” in Dublin, according to the writer Charles Lever

The reputation of Dublin’s northside has been much exaggerated in jokes and stories, a habit that seems to be equally popular on both sides of the Liffey. But it may have been justified in the early 19th century, at least, when rivalries between local schoolboys sometimes extended to open warfare, including the use of explosives. Or so the writer Charles Lever (1806 – ’72) claimed, from personal experience.

Born in Amiens Street, Lever went to a school called Wright’s, whose students had “unpopular sympathies” (unionism, presumably) and so tended to be attacked frequently by the local “roughs”. The roughs found allies in pupils from a rival school. And after a series of skirmishes with these allies once, it was decided by both sides that a full-scale battle should take place at Mountjoy Fields, then waste ground.

The writer’s biographer WJ Fitzpatrick takes up the story: “[Lever’s] army had its companies, commander-in-chief, its outlying pickets, reserves, and even its sappers and miners. Mr Robert Mallet, a subsequent eminent engineer […] first showed his talents by mining the ground on which the enemy were the next day engaged. A small mine was worked, and some pounds of blasting powder laid.”

Mine aside, the weapons used in the battle were unsophisticated. The “roughs” led off with a barrage of stones and, when they charged, they wielded only “blackthorns”. Still, as Fitzpatrick noted, “if applied to the skulls of the juvenile army”, such sticks “would have inflicted serious subsequent loss on letters, law, science, physic, and divinity”.

In any case, the charge of the rough brigade was interrupted when, detonated by “a lighted cigar”, the mine blew. “The explosion scattered dismay and inflicted slight bodily wounds. Lever’s company suffered quite as much as the enemy; the faces on both sides were scorched and scratched. The army of the north retreated in disorder, leaving Mr Wright’s pupils in possession of the field – only to be scared by the rapid approach of the police . . . ”

It should be noted that in his later career, Lever was as famous for being a raconteur as a novelist.

One of his admirers, Anthony Trollope, found his conversation and his books to be much the same thing. No doubt he was exaggerating the extent of this episode too.

That it was only pretend warfare was part of his defence at the resultant hearing in Marlborough Street Police Office, along with a patriotic plea that the boys might one day have to fight for their country in earnest, and would benefit from any practice. Even so, according to Fitzpatrick, the mock army’s chief commander (a boy called Biggar) was afterwards “flogged [on] five successive days” for refusing to divulge where Mallet had concealed his mining powder.

With Lever all but forgotten today, the story may now be most interesting for foreshadowing the career of Mallet, who did indeed go on to become an eminent engineer, specialising in the study of earthquakes, and becoming the founding father of modern “seismology”, a term he popularised.

In 1849, taking up where he left off in Mountjoy Fields, he planted kegs of gunpowder under a bastion of Dublin’s southside – Killiney Beach – and blew them up methodically to measure how the shockwaves travelled through sand and rock. He did the same on nearby Dalkey Island soon afterwards. By contrast with Mountjoy Fields, Killiney now commemorates his pioneering work with a plaque.

A few years later, when the Great Neapolitan Earthquake struck southern Italy, he was sent to investigate and wrote a landmark report. Later again – during the Crimean War and as if to vindicate Lever’s defence strategy for the schoolboy mine incident – Mallet designed an enormous mortar launcher, capable of firing 1,100kg shells more than two kilometres. In the event, the war ended before it could be used.

He didn’t just blow things up. His family iron company helped build many things, including the original Fastnet Rock lighthouse.

And among his smaller legacies are another word that, although a century and a half old, has never been as popular as in 2020. Yes, it was also Mallet who coined the term “epicentre”, adopted from Greek to describe the point on the earth’s surface directly above the “hypocentre” or focus of an earthquake, often far below.

The epicentre is not necessarily where the human damage happens. Of the 1906 San Francisco earthquake, for example, its offshore location remains uncertain. And yet the term has become mysteriously indispensable to journalists covering the Covid pandemic. In that context, it doesn’t mean anything more than “centre” would. But it sounds more prestigious, somehow. If nothing else, it may serve to emphasise that the speaker has been to college.