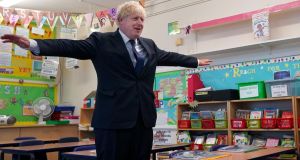 Britain’s prime minister Boris Johnson: Civic society, political representatives and the Government will again need to remind the British government of the existence, nuances and complexities inherent in the Border. Photograph: Pippa Fowles/EPA

The UK is set to roll out an online electronic travel authorisation (ETA) for visitors travelling to the United Kingdom as part of the post-Brexit border and immigration system. But just how will the system – set out in the immigration White Paper updated last month – operate on the island of Ireland?

Could a Donegal resident be required to apply for permission to get their groceries in Derry, and have to pay a fee to do so? Under the proposed system, yes. This unworkable scheme of pre-clearance is yet another example of the UK enacting policy without consideration for how that policy will affect the island of Ireland – much like Brexit itself.

This proposed system will impose a requirement for visitors and transit passengers to obtain a pre-authorisation before travelling to the UK. Irish and British citizens are exempt, as well as those on the Northern Ireland side of the Border who were able to obtain immigration status under the EU Settlement Scheme. However, EU and non-EU citizens living in the Republic cannot obtain UK immigration status and will be required to obtain an ETA to travel to the North.

Many countries operate a successful ETA system, such as the United States and Australia. However, while the UK’s proposals pose no issues for someone travelling to mainland UK for a week-long holiday, they simply don’t work on the island of Ireland, where approximately 30,000 people cross the Border every day to commute – it’s unfeasible and makes clear once again that Ireland and the current workings of the Border are but an afterthought for a government which consistently prioritises British sovereignty above all else.

The White Paper states that this system is a work in progress, and includes a commitment to the common travel area (CTA), but given the glaring inconsistencies illustrated, it’s clear the integrity and operation of the CTA has not been appropriately considered in these proposals. In addition, the present policy direction of the UK is to only grant CTA free movement to British and Irish citizens, leaving all other citizens who do not fall into those two demographics vulnerable. The UK does not propose any provision – even for other permanent residents – in the context of the island of Ireland. This risks creating a hard border for many EU citizens and other non-EEA nationals who currently enter freely into Northern Ireland from the South on local journeys as part of their daily lives – whether for work, education, family, or shopping. These legislative gaps are likely to be felt most keenly by those with non-Irish and non-British family members.

Much has been made of the “reciprocal rights” of the CTA since the Brexit referendum, but legally many of these rights remain unenforceable, and for many, render the political agreement unreliable.

The Irish Government has spent much of the past four years trying to soften the blow of Brexit on this island, in particular maintaining the open border and protecting the integrity of both the Belfast Agreement and the CTA, but they’re up against extraordinary odds. One need only look at how difficult it was to see implemented even the most minimal of commitments to rights protections within the Withdrawal Agreement, namely the Belfast Agreement and the CTA. The Government has already needed to intervene with unilateral decisions to protect citizens’ rights in the form of the commitment to European health insurance cards for the North.

There remains still a wealth of further outstanding, undiscussed, and unresolved issues. They range from drivers from Northern Ireland having to carry an insurance green card while driving across the Border from January of 2021 to dog-owners in Northern Ireland being required to carry a pet passport to take their dog for a walk in Donegal.

The immigration White Paper is but the latest in a long line of proposals from the British government that fail to consider the practicalities of cross-Border movement. The direction of the UK’s post-Brexit immigration system should be of particular concern considering the possibility of the Border becoming a point of interest.

Undoubtedly, civic society, political representatives and the Government will yet again need to remind the British government of the existence, nuances and complexities inherent in the Border between Northern Ireland and the Republic, which will require a reworking as to the machinations of an ETA system between both regions.

As for the rest of the outstanding issues, there isn’t much time left to emplace a Brexit security net capable of protecting all citizens on either side of the Border. There’s a concern within the North’s civic society that many of the persistent citizens’ rights issues aren’t being prioritised and have dropped from the agenda.

One thing is for certain – if post-Brexit policy that will impact the citizens on both sides of the Border is left in the hands of the British government, British policy will most likely continue to take precedence. And with the possibility of a no-deal Brexit still on the horizon, now is not the time for complacency.

Emma de Souza is a journalist and citizens rights campaigner

1 Ireland should allow controlled spread of Covid-19 among under-60s, Swedish expert to tell committee
2 Ireland’s top earners ‘do not see themselves as rich’, study finds
3 Air travel never going ‘back to way it was’
4 Miriam Lord: Let’s call a spad a spad – this Government has woeful timing
5 Gordon D’Arcy: the next fear for Irish rugby is England in Twickenham
Real news has value SUBSCRIBE