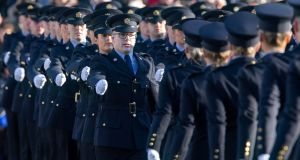 An Coimisinéir Teanga chronicles an eight-year effort, including a meeting with Garda Commissioner Drew Harris last year, to get the organisation to comply with its legal obligation to ensure gardaí can use Irish when stationed in Gaeltacht areas. Photograph: Colin Keegan/Collins Dublin

It may be written in the detached formality of the genre, but a tone of barely concealed exasperation runs through the latest report from An Coimisinéir Teanga.

The office of the commissioner acts as an ombudsman service and compliance agency on State services through Irish. In its latest monitoring report, Commissioner Rónán Ó Domhnaill lays out a litany of failures, delays and obfuscation that provide telling insights into how key organisations are run. Some examples verge on the absurd. Irish Rail cannot display the síneadh fada – in others words, it misspells the names of its passengers – on electronic reservation signs. Ó Domhnaill spent almost a year and a half pressing Irish Rail to fix this. In February the company told him its software is now capable of accepting the síneadh fada on small letters but is awaiting an upgrade to deal with capitals. This is hardly rocket science: English is the only major European language without diacritics; every other big train operator can manage it. In a similar vein, An Post, a body that deals in complex logistics, has been incapable of getting the Eircode system to use Irish place-names in Gaeltacht areas.

The most egregious failure outlined in the report, however, is that of An Garda Síochána. The commissioner chronicles an eight-year effort, including a meeting with Garda Commissioner Drew Harris last year, to get the organisation to comply with its legal obligation to ensure gardaí can use Irish when stationed in Gaeltacht areas. When the Garda did respond, those responses were “characterised by no timeframes, vagueness or conditional understandings,” the report states. The upshot is that An Garda Síochána is in breach of the Garda Síochána Act; not a good look. Ó Domhnaill says the lack of progress may result in a report on the matter being put before the Houses of the Oireachtas.

State agencies failing to comply with their legal obligations is bad enough. But underlying that failure is a depressing disrespect both to those whose first spoken language is Irish and to a State that purports to nurture and develop that language.

1 Coronavirus: 442 new cases, 4 deaths as stricter house visitor limits recommended
2 Dr Tony Holohan expected to return to his post next week
3 Covid-19 infections from funeral led to a third of one restaurant’s staff self-isolating
4 Don’t use Google, don’t use work email, don’t hit ‘accept all’: how to fight for your privacy
5 How one couple’s weekend away resulted in 30 Covid-19 cases
Real news has value SUBSCRIBE