The Irish Times view on the State’s apology for anti-gay laws: Recognising a great injustice 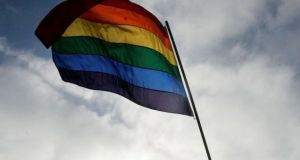 This week the Government issued a formal State apology to the victims of the anti-homosexual laws that were finally repealed 25 years ago. Photograph: Marcio Jose Sanchez/AP Photo

A formal State apology like the one delivered this week by Minister for Justice Charlie Flanagan to the victims of the anti-homosexual laws that were finally repealed 25 years ago has two functions. One is to bring some comfort to those still living who, in Flanagan’s words, “felt the hurt and isolation created by those laws, and particularly to those who were criminally convicted by the existence of such laws”.

That purpose has surely been achieved, not least by the recognition that the laws inflicted a great injustice, not just to those who were actually prosecuted, but on all those who were made to feel like second-class citizens because of their sexual orientation. This is an especially fine and thoroughly deserved moment of vindication for brave campaigners like David Norris, Tonie Walsh, Kieran Rose and many others who faced down prejudice to assert their own human dignity. In doing so, they did our Republic a great service.

The second purpose of an apology, though, is to learn from the wrongs of the past so that we do not repeat them in any form. Here we must reflect that the harm that was done to so many citizens did not come only from active and deliberate cruelty – though there was plenty of that to go around. It came, too, from political gutlessness, legal obtuseness and a sense that what happened to a minority was no great concern of the majority.

It is all too convenient in retrospect to point out that the oppressive laws, the Offences Against the Person Act of 1861 and the Criminal Law Amendment Act of 1885, were essentially British expressions of Victorian morality. But they were kept in place in Ireland long after they had been replaced in England and Wales in 1967 – and long after they were very widely known to be pointlessly cruel. Any illusion that criminalising homosexuality could somehow make it go away had long since vanished. What remained in Ireland was a pernicious mixture of pure prejudice and political passivity.

The prejudice was enshrined in Irish legal thinking by the shameful 1983 Supreme Court ruling against David Norris’s challenge to the laws in which male homosexual acts were held to be immoral, unchristian, a threat to both marriage and public health and liable to lead “a mildly homosexually orientated person into a way of life from which he may never recover… known consequences are frustration, loneliness and even suicide”.

These were the consequences, of course, not of sexual orientation but of laws that existed to render secretive and shameful people’s expression of their own most intimate natures. What we must recall is that mere cowardice allowed them to continue. In doing to, we must also wonder what shameful prejudices and injustices we allow to persist today merely because it is too awkward to confront them.