Instead of taking responsibility for his actions, Trump has falsely claimed he has no choice but to separate children. That’s not true 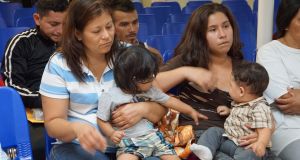 Mothers and children wait to be assisted by volunteers in a humanitarian centre in the border town of McAllen, Texas. The UN human rights chief condemned the “unconscionable” separation of migrant children from their parents at the US border. Photograph: Leila Macor/AFP/Getty Images

In a former warehouse in Texas, hundreds of children, separated from their parents and alone in an unfamiliar country, sit in spartan metal cages under lighting that stays on around the clock. They have no books or toys. They sleep under large foil sheets. One teenager cited in an Associated Press report said she was helping to care for a young child she didn’t know, and had to show others in her cage how to change the little girl’s nappy.

These are scenes from Donald Trump’s America. They are the result of a cruel and disgraceful policy decision by the administration – a decision the president himself, faced with a backlash from across the aisle in recent days, has been too cowardly even to acknowledge as his own.

While the White House holds out for legislative concessions in Washington, it will allow traumatised children to sit in cages a few thousand miles away in Texas

Almost 2,000 children have been taken from their parents since attorney general Jeff Sessions announced a “zero tolerance” policy on illegal immigration, which instructs Homeland Security officials to refer all cases of illegal entry to the United States for prosecution. The policy has resulted in children being removed when their parents are taken into custody. Previously, the authorities made an exception to such prosecutions for adults with children, but the Trump administration ordered an end to that practice apparently in order to deter more would-be immigrants from attempting to cross the southern border.

The policy shift, described as “unconscionable” by the outgoing UN human rights chief, Zeid Ra’ad al-Hussein, has prompted rare public criticism of the president from within the Republican establishment, whose leading figures too often choose to be silent and complicit when faced with Trump’s outrages. Republican senator Lindsey Graham has pointed out that Trump could stop the policy “with a phone call”. Former first lady Laura Bush called it “immoral”, while Trump’s wife Melania also criticised the practice while calling on “both sides” to come together to achieve successful immigration reform.

That echoes one of her husband’s disingenous talking points. Instead of taking responsibility for its actions, the Trump administration has falsely claimed it has no choice but to separate children. That’s not true. Contrary to Trump’s own claims, no law requires families to be separated at the border. He instituted the policy and he could end it immediately if he wished. It’s difficult to avoid the conclusion, then, that the administration is using innocent, vulnerable children as leverage to get the deal it wants on immigration. That would include full funding for a border wall and an overhaul of the system for legal entry to the country.

So while the White House holds out for legislative concessions in Washington, it will allow traumatised children to sit in cages a few thousand miles away in Texas. Few images more grimly capture the moral depths to which Donald Trump has brought a great country.