The Irish Times view on child protection: A litany of failings

Future lapses should involve serious consequences for those responsible 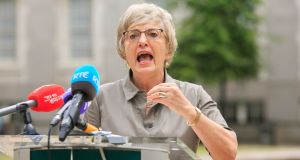 Minister for Children Katherine Zappone speaking to media in response to the findings of the Hiqa report into Tusla on Tuesday. Photograph: Gareth Chaney/ Collins

The litany of weaknesses and failings identified by the Health Information and Quality Authority (Hiqa) in how the child protection agency Tusla handles child sexual abuse allegations is deeply disturbing.

Poor record-keeping and the inability of Tusla computers to communicate directly with databases within the HSE and the Garda Síochána are unacceptable child protection inadequacies. Administrative difficulties experienced by Tusla and the Garda in dealing with retrospective allegations of child sexual abuse require urgent action.

And while efforts are being made to co-operate more effectively with the HSE, that initiative remains a work in progress.

Because the Hiqa review was specifically precluded from addressing false allegations made against Garda whistleblower Sgt Maurice McCabe, this lengthy report amounts to a critique of operational activities and “system failures”. Individuals are not identified or held to account. The document should be regarded as a benchmark for best practice. Future lapses or failures in administration should, therefore, involve serious consequences for those responsible.

In its defence, Tusla has mentioned staff shortages and inadequate Government funding. While a sufficient number of social workers are not being trained in State-funded colleges and recruitment of these professionals falls short of what is required, the Hiqa report found that staff shortages could not be used as “a default reason” for failing to deliver a safer service for children.

The reasons for unsafe services, it advised, grew out of inadequate management oversight, poor record-keeping and delays in responding to referrals involving child abuse allegations. There was, in effect, a gap between Tusla’s policies and what happened on the ground.

Taoiseach Leo Varadkar acknowledged there were “enormous shortcomings” in child protection and undertook to implement the report’s recommendations in full. Time will tell. Successive governments, confronted by unpalatable official reports, promised to act only to succumb to the inertia within the public administration.

This time it must be different. Reform of investigation, reporting and oversight practices will be required. Such change will have to include both current and retrospective allegations of child sexual abuse.

This rigorous approach should have the capacity to bring about a much closer professional relationship between Tusla, the Garda Siochána and the HSE.

Protecting children from the immediate threat of sexual abuse should not inhibit the investigation of retrospective allegations against adults. Predators reoffend and anecdotal evidence suggests that child sexual abuse is more prevalent than we may wish to recognise.