In both Greece and Macedonia, influential politicians are vowing to block the deal and ensure the ‘Republic of North Macedonia’ is stillborn 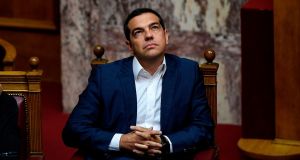 Macedonia was spared the bloodshed that ravaged other ex-Yugoslav republics in the 1990s, but its declaration of independence was not without acrimony. Greece objected to its new neighbour’s very name, saying that it implied a territorial claim on its own northern region called Macedonia, and so the fledgling state was recognised provisionally by the UN and other international organisations as “the former Yugoslav Republic of Macedonia”.

Last week, Macedonian prime minister Zoran Zaev and Greek counterpart Alexis Tsipras announced they had agreed to finally end the 27-year dispute, with a compromise deal that would change Macedonia’s name and lift Athens’s veto on its bid to join the EU and Nato. Their declaration met with almost unanimous international approval, and was hailed as a victory for dialogue, moderation and flexibility in a region that still bears the fresh scars of nationalist fanaticism.

As well as healing a chronic sore, the deal could add some shine to Brussels’s patchy policy in the region ahead of a summit of EU leaders this month, and allow Nato to invite Macedonia to join its own summit in July. And yet, in both Greece and Macedonia, influential politicians are vowing to block the deal and ensure the “Republic of North Macedonia” is stillborn, with the strongest outrage coming from right-wing parties that blocked progress on the issue while in power.

In Greece, the New Democracy party has launched a no-confidence motion against a government it accuses of making “unacceptable concessions” to Skopje; Tsipras also lost support on the issue from a nationalist coalition partner, the Independent Greeks, complicating an eventual parliamentary vote on the deal. That will come after Macedonia conducts a referendum on its new name and a ballot in parliament, where Zaev will need votes from a bitter enemy, the nationalist VMRO-DPMNE party, to allow the requisite changes to the constitution. Macedonian president Gjorge Ivanov has also rejected the compromise deal. There will be more acrimony yet before a new name appears on Balkan maps.

1 Coronavirus: 25 people die in the State as new Garda powers come into force
2 Coronavirus: More ‘striking’ evidence BCG vaccine might protect against Covid-19
3 Bernie Sanders drops out of Democratic race for US presidential nominee
4 Coronavirus: Third-level students will not have to sit traditional exams
5 Lockdown exit: How can Irish economy reopen without big health risks?
Real news has value SUBSCRIBE