The Irish Times view on the UN Human Rights Council: Fix it from the inside

The United States has withdrawn from the United Nations Human Rights Council, accusing it of a "chronic bias against Israel." Video: Reuters 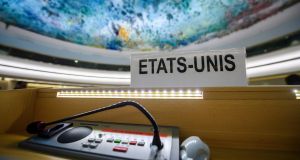 The US name plate one day after the United States announced its withdrawal at the 38th session of the UN Human Rights Council at the UN headquarters in Geneva. Photograph: Martial Trezzini/EPA

The United Nations Human Rights Council is far from perfect. It has inbuilt flaws and needs to be reformed. But it has also been growing more effective in recent years, and the world is better for its existence. The United States is making a big mistake in leaving it.

Established in 2006 to replace the discredited UN Commission on Human Rights, the council’s 47 rotating members are elected by their peers for three-year terms. Those open competitions mean that, today, for example, the council includes flagrant human rights abusers such as Saudi Arabia, the Democratic Republic of Congo and Qatar.

The rationale is that elections give countries an incentive to behave better, and by involving all states – as opposed to only those with impeccable records – the forum forces despots to engage with the rights agenda. One of the council’s most effective tools is the universal periodic review that states are subjected to by their peers. Authoritarian states are far more likely to heed other governments than they would another bureaucratic institution, or so the thinking goes.

For the council’s critics, hypocritical lectures on human rights from, say, Saudi Arabia or Egypt are too high a price to pay. The US has long complained that Israel receives disproportionate criticism, partly because a standing agenda topic (“item 7”) on the Palestinian territories must be raised at every session. That focus has been lessening, however. There is also increasing evidence that regional groups are a little less willing to shield their own; Iran, Syria and Sudan have all failed to be elected or withdrawn their candidacies in recent years.

In announcing its departure from the council, the US is sending yet another signal that it is relinquishing its leadership role in the world. More than that, it is leaving Israel even more isolated and giving up some of the leverage it holds over the world’s worst human rights abusers. That the US finds itself among just three other countries – Iran, North Korea and Eritrea – in refusing to take part in the council’s meetings tells its own story.