The Irish Times view on Ireland’s climate policy: A shameful record of inaction 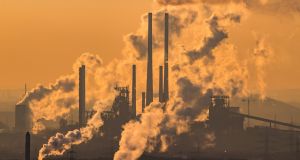 Reports have piled up indicating that Ireland is moving more slowly to mitigate the causes of climate change than critics of government inaction feared. Photograph: Lukas Schulze/Getty Images

Taoiseach Leo Varadkar admitted last January to the European Parliament that Ireland was a “laggard” in fulfilling its climate change treaty obligations, and that he was “not proud” of this. In just five months since then, international evidence has mounted that climate change is accelerating even faster than anticipated. Meanwhile, reports have piled up indicating that Ireland is moving more slowly to mitigate its causes than critics of government inaction feared.

So far, there is no reason to believe that this Taoiseach takes the issue any more seriously than his predecessor. Enda Kenny set the bar very low when he waxed eloquent about the unprecedented threats posed by climate change inside the Paris UNFCCC conference in 2015. He then told the Irish media outside that we would not meet the targets he had just agreed to.

This is the depressing context of double-speak and contradiction in which we must read the report published on Monday by the Climate Action Network (CAN) Europe, an NGO supported by the European Commission. It shows that, while no EU country is yet meeting its targets, Ireland is the second-worst performing of the EU28.

Our compliance rate is 21 per cent, whereas Sweden’s is 77 per cent, Portugal’s 66, and even a country as hostile to EU regulation as the UK manages 37 per cent. Our rate is much worse than laggardly. It suggests our commitment to responding to the defining challenge of our century is utterly hollow. Our main concern should not be with the consequences in terms of potential direct cost for non-compliance, tough though the penalties will be. A European Commission report published last month warned that we could be charged as much as €600 million annually if we continue missing targets after 2020.

However, the really serious consequences are with us already in terms of increasingly frequent extreme weather events. Storm damage, flooding, and disruption to agricultural seasonality are already starkly evident problems, and will get much worse unless we take radical action not soon, but now.

We should be moved also by the much greater suffering visited on countries more vulnerable to climate change, such as Bangladesh and the states of sub-Saharan Africa. Here again the consequences are already sharply visible, as the Mediterranean becomes a watery cemetery for desperate climate migrants.

One has to wonder, then, what it will take for Ireland’s lack of pride to turn into shame, and for that shame to prompt meaningful action. The Government would do well to adopt the sensible recommendations of the Citizens’ Assembly, which demonstrates that a well-informed public wants to see urgent measures taken to deal with climate change, and is willing to pay for them.