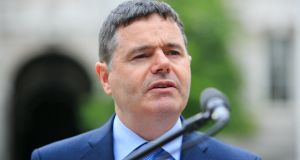 The commitment by Minister for Finance Paschal Donohoe not to use all the leeway available under the EU budget rules is welcome. Photograph: Gareth Chaney/Collins

The Government enters the key stage of preparation for the 2019 budget with the exchequer finances in a relatively strong position. It now faces a key test in deciding how to manage this. In the past, successive Irish governments have found the temptation to increase spending and cut taxes as much as possible to be well-nigh irresistible. This time, we are told, it will be different.

The commitment by Minister for Finance Paschal Donohoe not to use all the leeway available under the EU budget rules is welcome. Doing so, as the Government has said, would risk adding to the already-strong momentum of economic growth and overheating the economy.

The Government, we must remember, has already committed to spending significant additional resources next year. Donohoe has announced that extra spending of €2.6 billion is being directed to increase investment levels, as well as additional public pay and meeting other commitments in areas such as health.

A warning from the Economic and Social Research Institute that, given this level of spending commitment, there is no scope to also reduce the overall tax burden, appears about right. The Government can still choose to reform taxes by cutting in one area and raising revenue in another, of course. But it is better now, given the infrastructural gaps, to direct additional resources to address these shortcomings, rather than engaging in a round of tax cuts.

There are varying views on the risks of the economy overheating. But there is another compelling reason for prudence. The economy is at the top of a growth cycle and dangers lie ahead – most notably Brexit. Sensible budget policy would aim to leave some leeway to increase spending and cut taxes when growth slows, to support a slowing economy. History has taught us that if you do not do this, then spending has to be cut and taxes hiked just as the economy slows, potentially making a difficult situation worse.

The politics of this, of course, are difficult. The money is there, so why not spend it? There is no shortage of areas which could benefit from extra cash. And the calls to “ give something back” to taxpayers will grow as budget day nears. But the Government has already decided that its priority is investment, while it will also start putting cash into a new rainy day fund. It should also aim to eliminate borrowing in 2019.

Although not a matter for budget day itself, the final part of the puzzle is ensuring money is spent as efficiently as possible. With billions extra to go into investment programmes, it is essential that the potential these offer to improve the capacity of the economy and balance economic and social goals is fully achieved. When budget-day fuss dies down, this will be the really significant challenge facing the Government.