The Irish Times view on Germany’s coalition: On the ropes 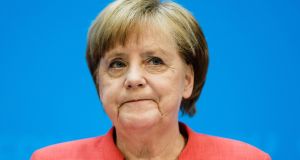 The number of people applying for asylum in the European Union fell by 44 per cent last year, but the political tensions caused by immigration are only growing more acute. The sharp drop in applications, reported by the EU’s asylum office, confirms a steady decline in the annual arrival rate since 2015, when more than one million people, many of them fleeing the war in Syria, entered the EU. But the aftershocks of that influx are still pulsing out across the continent. Populist parties have both fed and benefited from public unease about immigration to win power in Poland, Hungary, Austria and, in recent weeks, Italy.

This week the issue is destabilising politics in Germany, where interior minister Horst Seehofer is threatening to close the country’s borders unless chancellor Angela Merkel can secure stronger asylum regulations at EU level in the next two weeks. Seehofer says police should be empowered to refuse entry to asylum seekers who have already filed papers elsewhere in the EU, but Merkel believes the issue is best dealt with at EU level. She hopes to slow the inward flow by striking bilateral deals with southern states such as Italy and Greece. One model is the EU-Turkey deal, under which Ankara agreed to staunch the flow of migrants into Europe in exchange for cash.

Seehofer’s stance, which threatens Merkel’s coalition, is partly tactical. His party, the Christian Social Union, faces state elections in October, and sees a tough immigration policy as one way of halting the advance of the far-right Alternative für Deutschland and save its absolute majority.

But while the latest stand-off may have been triggered by those regional calculations, its implications are far broader. Ultimately, by mimicking the AfD’s talking points without offering a serious view on how EU-wide migration should – and, more importantly, could – be managed, the CSU risks giving a long-term boost to the far-right while antagonising Germany’s neighbours and bringing the EU no closer to addressing an issue that is driving its members apart.