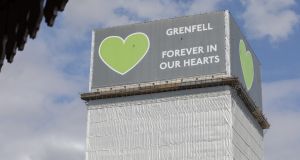 Commemoration of the Grenfell fire been muted, but survivors’ group Grenfell United organised a series of events, and a silent march was held. Photograph: Anselm Ebulue/Getty Images

Nadia Choucair’s appeal now sounds all too familiar. “We can’t breathe,” the 33-year-old-teacher desperately told fire brigade dispatchers as flames raced up Grenfell Tower to the 22nd floor. She, her three daughters, husband, and mother would die there. That was three years ago last week.

On June 14th church bells across London tolled 72 times – once for each of the victims of the Grenfell fire. Green lights illuminated the windows of tower blocks across the city to remember a tragedy whose story and lessons weave seamlessly into the two current national preoccupations, coronavirus and racism. The particular attrition wrought on the black and Asian communities by the virus – double that of the white community – and the institutional racism that underpinned housing and social policies were both expressed in the Grenfell tragedy in their own way.

Commemoration has been muted, but survivors’ group Grenfell United organised a series of events, and a silent march was held. The point, not just to remember and comfort the bereaved, but to say that the promise that this will never be allowed to happen again has yet to be honoured. Despite government commitments, some 246 buildings throughout the UK still have aluminium composite material (ACM) cladding, some 56,000 people living in homes wrapped in the flammable cladding which made Grenfell a death trap.

And the public inquiry onto which survivors have pinned much hope is currently in suspense because of the pandemic. It resumes next month, but police suggest criminal charges are not now expected even to be considered until 2022. Lawyers for the contractors and cladding manufacturers have been to court to ensure that their inquiry evidence will not be used against them in court.

Already, evidence has revealed that the company that made the cladding panels knew in 2011 they were “not suitable for use on building facades”, and the fire engineers on the refurbishment knew that the cladding would fail in the event of a fire. Grenfell still awaits justice.