There are 18,000 largely autonomous police departments across the US, each with their own recruitment, training and procedures 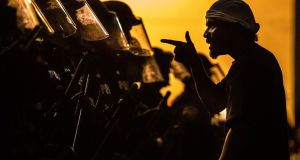 A protester stands at a line of Tucson police officers in riot gear at Cushing Street and Church Avenue early on Saturday, May 30th in Tucson, Arizona. Photograph: Josh Galemore/Arizona Daily Star via AP

For Joe Biden police reform is a hot potato, and the Democratic presidential candidate has carefully avoided backing the “defund the police” calls that have swept the US following the Minneapolis police killing of George Floyd.

But Congressional Democrats are seizing the moment to back a Bill that would ban police chokeholds, create a national registry to track misconduct, make it easier to prosecute police abuse, and ban certain “no-knock” warrants, which allow police forcibly to enter properties. Trump will veto but, polls suggest, will pay a price at the election.

Minneapolis councillors have gone yet further, saying they will vote to dismantle and defund the city police department and work with residents “to identify what safety looks like for everyone” in “a police-free future”. The city’s school board on Tuesday voted to end its contract with the police department. Cities like LA and New York have pledged to cut police budgets, redirecting funds to social, educational and housing projects. Stances which only weeks ago would have been politically inconceivable.

US police killed 1,098 people last year, one-quarter of them black Americans. In part the killings are the product of a lax gun culture, but racism within the police and a culture of impunity has meant that over the past 15 years just 110 police have been charged with felony homicide after killing someone while on duty. Only five have been convicted of murder.

The challenge of police reform is huge. There are some 18,000 largely autonomous police departments across the US, each with their own procedures, recruitment, training and procedures. Police unions have been powerful and the police have traditionally been strongly backed by politicians fearful of the “law and order” lobby.

But while there has been some support for abolition, a groundswell accepts that many traditional police roles like dealing with mental health issues, family counselling, school protection or parking enforcement could be hived off.