The Irish Times view on China’s latest Covid-19 outbreak: A warning from Beijing

The development is a sobering reminder that even when the virus recedes, there can be no return to normality 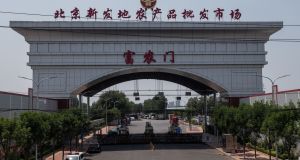 The death of a 52-year-old man named Tang was soon followed by the discovery of dozens more cases, mostly linked to the large Xinfadi market (above) in Beijing. Photograph: Nicolas Asfouri/AFP via Getty Images

More than a week ago, Beijing announced its first domestically transmitted coronavirus case in 55 days – a 52-year-old man named Tang. His case was soon followed by the discovery of dozens more cases, mostly linked to the large Xinfadi market in the city.

Within days the authorities reimposed strict “wartime” measures over parts of the capital to prevent a second wave of infections. These are expected to stay in place for some time although the authorities have claimed to have the outbreak under control.

Last Wednesday 1,200 flights to and from Beijing were cancelled and schools closed again, a month after reopening. Masks are back. And in the last week the city claims to have newly tested some 3.5 million of its 22 million people. Other provinces have also begun rolling out new containment measures. Singapore and South Korea, which both appeared to have decisively pushed back the first wave of the outbreak, have had worrying flare-ups that have led to reimposition of some restrictions.

So much for the Chinese boast that the pandemic had been successfully contained and that others could follow Beijing’s lead. And yet that was never the lesson we should have been learning from the Chinese example. Far more important is the more complete, complex picture we are seeing emerge now.

This pandemic is far from over. As some countries have yet to come out of their first wave, some tired and even giving up the fight, the possibility of a second wave risks turning into the likelihood of second waves.

In Europe the picture is not all positive. In Germany’s western state of North Rhein Westphalia, around 7,000 people have been quarantined and schools and kindergartens have been closed again after a new outbreak.

In the US, however, vice-president Mike Pence last week castigated the media. They have got it all wrong, he claimed. Fears are “overblown”, the US was not facing a second wave. It was “winning the fight against the invisible enemy”.

But top White House pandemic adviser Dr Anthony Fauci has cautioned that the crisis is far from over, and globally, the numbers show that the pandemic is surging. The US is not alone; big states such as Russia, Brazil, India and Egypt are on the upward curve.

Beijing’s outbreak is a sobering reminder that even when the virus recedes, there can be no return to normality.

The speed at which the coronavirus can spread, lingering uncertainties about how it spreads, who it kills and why, long testing requirements for vaccines, and concerns about the effectiveness of test and trace systems, means heightened vigilance will remain a necessity in Ireland and elsewhere.