The rereading of history is a constant process, and no statue, any more than any historical figure, should be guaranteed a permanent place in the national Pantheon 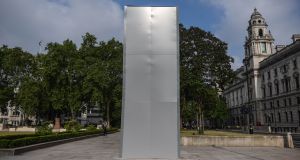 A protective barrier is seen around the statue of Winston Churchill in Parliament Square in London in anticipation of protests on Friday. Photograph: Peter Summers/Getty Images

The commemoration of the 1912-22 decade of revolution has been striking for what it has not been. Apart from a few notable recriminations, including controversy over the Royal Irish Constabulary, it has not been a celebration which glorified or privileged any one of the overlapping narratives of our history. Understanding and embracing difference has been central to the commemoration experience.

And so there is a strong temptation to urge caution on those rushing to tear down statues of racists and imperialists across Europe or in the US. Not least because for all the merits of the symbolism involved, such action does little to combat the causes of racism. But there is no escaping the reality that many of the statues causing offence to black communities are much more than commemorative. They honour and celebrate notional “heroes” and are as blunt and threatening as any poster that says “black man know your place”. And their location, in pride of public place rather than museums, is an implicit political affirmation of that warped message.

In the American south the battle over symbols of the Confederacy is testimony to that reality, its “heritage” statues used to rebrand the civil war not as a defence of slavery but of the rights of individual states. After the George Floyd killing many states and governors, have again moved with local people to replace them: in Richmond, Virginia, protesters toppled Confederate Gen. Williams Carter Wickham, and statues have gone in Birmingham and Mobile, Louisville, Jacksonville, and Alexandria, among other places.

In 2019 the Southern Poverty Law Center recorded 780 monuments dedicated to the Confederacy across 23 states, and, following protests at the 2015 Charleston mass shooting of churchgoers, 114 were removed nationwide. The movement is being taken up again.

The removal of an Antwerp statue of King Leopold II this week following protests also marks a welcome and important point in Belgium’s coming to terms with its brutal colonial history in Congo that has also seen a complete overhaul of its Africa Museum. Leopold, whose “civilising” role was feted in the old museum, is blamed for the deaths of an estimated 10 million people in the country which he ran as a personal fiefdom.

In the UK, the toppling of slaver Edward Colston in Bristol has been followed by the removal of noted slaveholder Robert Milligan from London Docklands. In Oxford the university is contemplating removing the statue of arch-ideologue of imperialism Cecil Rhodes to a museum where it now belongs.

The rereading of history is a constant process, and no statue, any more than any historical figure, should be guaranteed a permanent place in the national Pantheon, let alone our street corners.

1 Businesses can show ‘Dunkirk spirit’ by taking new direct ferry to France
2 Exiting Level 5: What will reopen, when will it happen and when will we know?
3 Covid-19: Government set to reject advice and approve reopening of gastropubs and restaurants
4 Miriam Lord: Helen McEntee holds up well for someone with barely a leg to stand on
5 Miriam O’Callaghan’s ‘forever sorry’ apology puts her usual touchy-feeliness in the shade
Real news has value SUBSCRIBE