The Irish Times view on Irish foreign policy: a seat at the top table 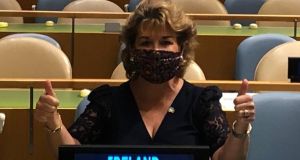 In the foreign policies of many small states, the trend in recent years has been towards a narrowing of focus – from the global to the regional, from the broad horizon to the tapered angle of the specialist. A few years ago, Ireland looked likely to follow that same path. With EU functions having moved from the Department of Foreign Affairs to the Department of the Taoiseach, the closure of embassies, the bedding down of the peace process and Ireland’s growing stature in the development aid sphere, Irish foreign policy was in transition, its destination unclear.

A contraction could well have been the result of that flux, were it not for Brexit. The UK’s decision in 2016 to leave the European Union prompted urgent soul-searching in Ireland about its place in the world, its relationships and its alliances. Instead of narrowing, the Government concluded, Ireland’s horizon had to expand. The Global Ireland initiative set out to double Ireland’s footprint, through its diplomatic missions and trade agencies, by 2025. Offices opened in parts of Asia, Africa and Latin America where Ireland had never before had a presence. The State sought out new allies in the EU and began to cultivate states in regions, such as francophone west Africa, where its voice had largely been inaudible.

A beneficiary of these shifts was Ireland’s campaign for a seat at the United Nations security council for 2021-22, which concluded on Wednesday when Ireland emerged victorious in the first round of voting in New York. The successful campaign is a significant achievement, not least given that Ireland’s two rivals, Norway and Canada, came to the contest with impeccable credentials and had invested heavily in their campaigns.

It’s entirely legitimate to interrogate the Government’s decision to spend so much time and political capital for a place on a body that can seem tragically ineffectual when the world needs it most. It’s also quite right to insist that, in a system where vote-trading is common, Ireland’s win cannot come at the cost of our principles. As it prepares to join the council, the Government should explain what it hopes to achieve there, in particular when its turn comes to chair the council.

But no small country should apologise for pursuing its interests and its ideals through an ambitious foreign policy. Every day, hundreds of Irish men and women put on the blue beret and place themselves at the service of the UN’s founding vision. Not to seek to influence the decisions to which they are subject would be perverse. In our globalised yet fragile world, where a large existential threat looms ominously before us, the distinctions between the domestic and the global are fading fast, and yet in this era of resurgent nationalism the values that Ireland holds dear – multilateralism, co-operation, human rights – are under threat like never before in the postwar era. Those values are worth defending.

4 We think we have enough for a deposit. Should we buy now or rent a bit longer?