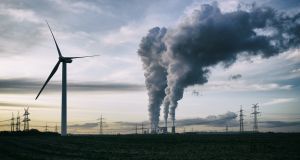 The commitment to an average 7 per cent a year emissions reduction from 2021 to 2030 ranks us among leading EU states and matches the European Green Deal. Photograph: iStock

The climate action elements in the programme for government are unprecedented in ambition. If implemented vigorously and backed by transparency on how each sector is performing, it will transform the economy and society for the good.

There is a need for honesty on how that will be achieved. It will be costly and hugely disruptive, but the result will be a collective embracing of sustainability, much better quality of life in urban spaces, a more balanced approach to land use, less air pollution and a start on halting appalling decline in biodiversity – all to be done in less than a decade to avoid dangerous tipping points triggered by an overheating world.

The commitment to an average 7 per cent a year emissions reduction from 2021 to 2030 ranks us among leading EU states and matches the European Green Deal. Decarbonisation and shifting away from fossil fuels takes time to translate into big CO2 reductions, so pragmatism in averaging the cut up to 2030 is warranted. Yet there are also worrying aspects: insufficient costings, lack of targets and policy elements which are aspirational.

Fears agriculture would be exempted are allayed by reference to every sector contributing to meeting the overall target. Supports targeted at family farms and rewards for environmental stewardship mean the transition is realisable while retaining food production close to the heart of the economy. Robust carbon accounting will require, however, that methane from cattle and sheep be reduced, which is likely to see a reduction in herd numbers.

All of this makes a very strong case for Green Party members to endorse participation in government. Such is the polarisation around the scale of action needed to save the planet, those who support this approach will have to fight hard to win the argument in favour of an imperfect deal. For Fine Gael and Fianna Fáil, it is an opportunity to embrace part of the change agenda demanded by the electorate and stabilise Irish politics at a time of immense uncertainty.