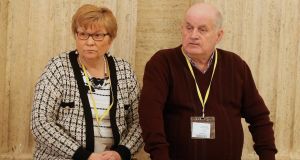 The visit to Stormont by the parents of Paul Quinn, brutally murdered close to the border 13 years ago, should make it clear to the Sinn Féin leadership that questions about the activities of the IRA or those associated with the organisation haven’t gone away. They will continue to dog the party until it addresses them adequately. Breege Quinn, Paul’s mother, has repeatedly called on Northern finance minister Conor Murphy to clearly retract his claim that her son was a criminal and to fully cooperate with the Garda and the PSNI.

Just before the recent election in the Republic, Murphy unreservedly apologised for his claim in 2007 that Paul Quinn was involved in criminality. Breege Quinn says this did not go far enough and she wants Murphy to bluntly say her son was not a criminal and to give information to the Garda and PSNI about IRA members he spoke to in 2007. At that time Murphy said he was told the IRA was not involved.

If Sinn Féin wants to move on from the events of the past, leading members like Murphy must be clear and unambiguous about their willingness to cooperate with police investigations in both jurisdictions into crimes that have taken place long after the Belfast Agreement.

The party’s failure to do so means that despite its electoral success on both sides of the border, political opponents will continue to raise legitimate questions about its commitment to democratic norms. The visit of the Quinns to Stormont prompted questions in the Assembly chamber about Murphy’s fitness for office. They also prompted questions from journalists to Mary Lou McDonald as she attempts to assemble support for her nomination as taoiseach.

Admittedly, there has been progress in recent times. Deputy First Minister Michelle O’Neill’s recent attendance at a PSNI recruitment event was welcome. However, until there is a more convincing response to issues such as those raised by the Quinns, doubts about Sinn Féin’s sincerity will remain and will undermine its demands to be treated as a normal political party.

1 Coronavirus: Varadkar returns to practising medicine to help during crisis
2 Irish doctors on getting Covid-19: ‘In 90 minutes, I deteriorated quite rapidly’
3 Restarting Ireland: When and how will we ‘get back to normal’?
4 Donald Trump’s clown car administration has put the fear in all of us
5 Genetics shed light on origins of Irish strains of Covid-19
Real news has value SUBSCRIBE