The Irish Times view on government formation: focus must turn to policy

To date the fixation has been on which parties could form a coalition. What matters most is what the next government does 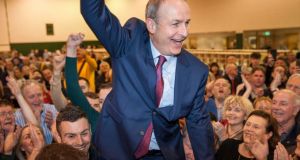 The decision of the Fianna Fáil parliamentary party to back overwhelmingly its leader Micheál Martin in continuing to rule out Sinn Féin was probably the most significant event of the week. Photograph: Daragh Mc Sweeney/Provision

The process of forming the next government is not a game or a dance; it is a serious business and its ultimate conclusion will affect the lives of citizens. But there are many elements of ritual in the process, already evident this week.

After a spectacular breakthrough last weekend, Sinn Féin has made all the running so far. Its leader, Mary Lou McDonald, has held preliminary talks with the smaller parties, while the other parties have also been talking among themselves. But no real business is being done. It’s early days yet.

It is clear, however, that Sinn Féin’s desire to lead a government of the left has run up against the cold reality of the parliamentary numbers. Barring an unlikely return to a confidence-and-supply agreement, it seems an arrangement between two of the big three parties will be needed to form a government. That is why the decision of the Fianna Fáil parliamentary party to back overwhelmingly its leader Micheál Martin in continuing to rule out Sinn Féin was probably the most significant event of the week.

Fianna Fáil and Fine Gael have legitimate concerns about Sinn Féin which infuriate supporters of that party. The controversy which arose this week when frontbencher David Cullinane shouted pro-IRA slogans at a party event will have heightened unease. Were Sinn Féin to be in government, it is likely that Cullinane would be a minister. The incident demonstrated the gulf that remains between Sinn Féin and the parties it says should talk to it about government.

Opposition can be a comfort zone for politicians. But opting to stay there achieves nothing

The truth is that if Sinn Féin really wishes to be in government with either Fianna Fáil or Fine Gael, it will take steps to understand and address these concerns, rather than dismiss and delegitimise them. There is no sign of that.

To date the fixation has been on which parties could form a coalition. And that process may continue for some time. But what matters most is what the next government does. There are several acute social problems the next government needs to address, and address quickly. These include, but are not limited to, a housing crisis, an unacceptable level of child poverty, a growing urban-rural divide, a pensions time bomb, a health service that is in many respects not fit for purpose and a need to take rapid action to prepare for and mitigate the effects of global warming. If it takes a few months to assemble a government capable of taking on this vital work, so be it.

Opposition can be a comfort zone, a blame-free existence, for politicians. But opting to stay there achieves nothing. Government is where change can be implemented, where politicians can make a positive difference to people’s lives. The parties and politicians who want action on these issues should seek to be part of a government with plans to do just that.