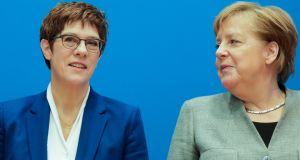 An election in Thuringia would not normally garner much attention beyond the borders of that tiny state in eastern Germany. But the breaking of a postwar taboo in last week’s state election there – a mainstream politician was elected premier with far-right support – has thrown fuel on the internal battle convulsing the Christian Democratic Union (CDU) while upending Angela Merkel’s succession plan and casting doubt on her continuance in office.

In voting to support the local Free Democrat (FDP) candidate as state president, even though they knew his election hinged on the backing of the far-right Alternative für Deutschland, the CDU in Thuringia set off street protests and a ferocious political row. It did not help that it was in Thuringia, in the final days of the Weimar Republic, that the Nazis first won power locally – with the help of conservative parties. The local CDU had acted in defiance of national party leader Annegret Kramp-Karrenbauer, the already beleaguered heir apparent to Chancellor Merkel, and on Monday the 58-year-old announced she would not put herself forward to lead the CDU in the next federal election, scheduled for autumn 2021.

While EU leaders are unlikely to mourn Kramp-Karrenbauer’s departure, they should be careful what they wish for

Kramp-Karrenbauer has had a torrid time since becoming Merkel’s anointed successor 14 months ago. Her lack of authority in a fractured party was compounded by a slump in the polls and a series of gaffes. But Merkel herself must take a share of the blame for the fiasco. It was she who decided to separate the roles of chancellor and CDU leader and to stay on as head of government until she completes her fourth term at the end of 2021. That made it impossible for “AKK” to stamp her authority on the party; instead, what authority she had quickly seeped away. An orderly transition engineered by a chancellor who prizes stability above all else has now collapsed in chaotic fashion.

That’s bad news for Germany, but also for the EU. With Germany due to take on the rotating presidency of the European Council from July, it will have to steer the union through sensitive debates on the EU budget and the migration pact. Securing agreement would be hard enough with Berlin fully engaged, let alone with its government involved in its own fratricidal battle and led by a lame duck chancellor. And while EU leaders are unlikely to mourn Kramp-Karrenbauer’s departure, they should be careful what they wish for. At the root of the CDU’s crisis is a split over how to respond to the threat on its right flank. Should it follow the example of Austria’s conservatives and veer to the right to arrest the AfD’s rise, or maintain Merkel’s centrist course and take the fight to the reactionaries? That anguished debate is a proxy battle for Germany’s future, and the longer it continues to consume Germany’s biggest political bloc the deeper the power vacuum at the heart of Europe with grow.