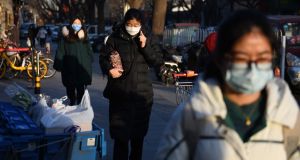 People wear protective face masks as they walk on a street in Beijing on Monday. Photograph: Greg Baker/AFP via Getty Images

In just over a month, the coronavirus outbreak has grown from a handful of cases in a provincial Chinese city to a global crisis of almost 72,000 cases across four continents.

The viral infection has killed more than 1,750 people and caused mass disruption, with two Chinese mega-cities on lockdown and economic activity having stalled in busy Asian commercial hubs.

The political fallout has been greatest in China itself, where strict social controls and internet censorship have been unable to contain public disquiet over official handling of the outbreak.

While President Xi Jinping has acknowledged failings in the initial slow response, Beijing has assiduously sought to pin the blame on local apparatchiks. A report in state media suggesting that Xi was issuing orders to contain the deadly virus on January 7th, almost two weeks earlier than previously thought, may be an attempt to counter the view that Beijing was slow to take control.

Yet it also implicates Xi in the botched early response, when the potential severity of the outbreak was kept quiet and containment opportunities were missed.

But for now the politics must wait. The focus is on limiting the spread of the coronavirus, known as Covid-19, and filling gaps in scientific knowledge so that testing and treatment can improve. Chinese authorities are encouraged by what they say is a decline in the infection growth rate since last Thursday, when a change in diagnostic criteria resulted in a spike in reported cases.

Nonetheless, the enforcement of a lockdown in the city of Xiaogan, which has a population of five million and the second highest number of confirmed cases, after Wuhan, underlines the scale of the crisis. How long those cities can remain closed off from the outside world – and how long their residents can tolerate inevitable shortages of medical and other supplies – are questions that will preoccupy the party leadership.

Japan has denied it is becoming a second major infection cluster, but a chain of domestic transmissions there has already resulted in the cancellation of the Tokyo marathon and could disrupt, or even jeopardise outright, the summer Olympics.

In this connected world, where despite large-scale containment efforts a respiratory disease can spread across 25 countries in a matter of weeks, the best hope is to limit the speed at which Covid-19 travels so that the medical response can catch up.

There is no vaccine or treatment.

A hand-held diagnostic kit would be an important breakthrough, obviating the need for saliva samples and laboratory testing and thus speeding up detection. The nightmare scenario, as the World Health Organisation has pointed out, is a rapid spread of the virus in the poorest countries in Asia and Africa, where basic health services and weak infrastructure would make detection and containment extremely difficult and all but guarantee that Covid-19 would become a pandemic.