The Irish Times view on Galway, Capital of Culture: And then it rained

While Storm Ciara has blown over, Galway’s troubles have not 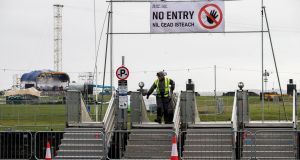 Construction workers dismantling steps at Galway’s South Park after organisers of the opening ceremony to mark Galway’s year as European Capital of Culture has cancelled the ceremony due to bad weather on Saturday. Photograph: Liam McBurney/PA Wire

Galway 2020 has not only been mired in controversy, setbacks and bad press but has become synonymous with crisis management. And then it rained. The cancellation of the opening event on Saturday was unavoidable due to the severe weather conditions, but to say that Galway 2020 has been in the eye of a storm since the city won the European Capital of Culture title four years ago is no understatement.

While Storm Ciara has blown over, Galway’s troubles have not. When the programme was unveiled last September, it seemed that the festival had overcome image problems caused by the early loss of key personnel and reports of lack of confidence among the local business sector. The scale of the programme, which extends from the city to many towns throughout the county, suggested that the organisers felt secure about funding.

Such confidence now appears to have been ill-founded; the envisaged funding remains elusive and the festival has had to acknowledge that the knock-on affect may require scaling back some of its programming. A serious funding shortfall has been evident throughout the process, the original projected €46 million cost now seems a flight of fancy. A decision to add on extra events since the bid was originally made was always going to be risky.

Galway, a city with a reputation for its vibrant cultural life, was handed a “once-in-a-lifetime” opportunity to enhance and build on that standing, nationally and internationally. A mere €2 million in support from local business that stands to gain significantly – compared to the €25 million of public money – is disappointing. Galway City Council’s deferral of a decision last month to grant an extra €2.5 million was hardly a show of confidence.

The most important outcome for any city involved in a capital of culture programme is the lasting legacy, which is often regenerative. It has to be hoped that the fallout from the Galway debacle will not be a lack of trust in any future Irish bids for the title.