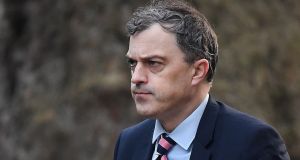 No details man, Boris Johnson is reputedly forensic about those who cross him. It has been clear for some time that Julian Smith would cease to be Northern Ireland Secretary as soon as the now all-powerful British prime minister reshuffled his cabinet.

The fuss yesterday about Chancellor Sajid Javid’s departure meant Smith’s axing made no London waves but, despite post-election finagling, the Dáil’s politicians voiced genuine regret. With Brexit straining British-Irish relations, Smith’s rapport with Minister for Foreign Affairs Simon Coveney has been much appreciated.

After successive nonentities apparently briefed to do and say the minimum, appointing Smith, the tough and skilled former Tory chief whip, did indicate genuine Johnson interest in restoring Stormont. But Smith’s alternate wheedling and chivvying of the DUP and Sinn Féin back into power-sharing, only five weeks ago, supported by deftly enlisting business and striking health workers to pressure the parties, was never going to save him.

As chief whip he had faced Johnson, one of the Brexiteer ultras who most troubled Theresa May. Last October he was disobliging to Westminster’s NI Affairs Committee which, for Johnson, was still a notional lever in EU exit negotiations. A month earlier, leaks from Cabinet showed him criticising Johnson’s prorogation of parliament and saying Brexit was generally bad for the North. Smith pilloried the DUP for their tardiness in signing up to a restored Stormont, but Johnson had already thrown them overboard.

A courteous man, Smith will be remembered most fondly perhaps for rushing through legislation, much-stalled, to compensate the survivors of institutional abuse. On the day the Stormont deal was done, he hurried away to hold his promised reception for them at Hillsborough.

Coveney and Smith, briefly but potently, made the north a priority for Britain and Ireland. The result is a functioning set of institutions that offers Northern Ireland a way out of its recent stasis and the potential for a brighter future.

1 Costa living: ‘Move home to Ireland? I’d hate it’
2 Anti-Irish bigotry in Britain has not gone away
3 Steve Coogan: ‘Come Out, Ye Black and Tans is two fingers to the British’
4 Bernie Sanders cements lead in Democratic race after win in Nevada
5 ‘I never truly understood what community meant until I moved to Donnycarney’
Real news has value SUBSCRIBE