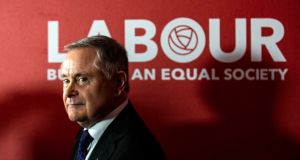 Brendan Howlin battled resolutely to keep the party afloat and he just about managed it in the most difficult of conditions. Photograph: Sam Boal/Rollingnews.ie

The resignation of Brendan Howlin as Labour Party leader has put the spotlight on the party and its future in Irish politics. Howlin battled resolutely to keep the party afloat and he just about managed it in the most difficult of conditions. With just six Dáil seats, whoever is elected as the new leader will face a daunting challenge to make Labour a relevant force again.

It is important that the party’s vital contribution to the creation of the tolerant, pluralist society we have today is not forgotten. Labour was founded in 1912 before the Irish State was born and a decade later it performed a crucial role in ensuring that the institutions of an independent Ireland put down firm roots.

As civil war raged in 1922, Labour TDs took their seats in the Dáil and provided constructive opposition to the pro-Treaty government while republicans attempted to overthrow the State by force of arms. When that changed and Fianna Fáil formed a minority government in 1932, it did so with Labour support.

The party first took office as a component of the inter-party government in 1948. Incidentally it insisted on a massive house-building programme as part of the deal. Since then it has been in coalition on a regular basis, mainly with Fine Gael but also with Fianna Fáil. Labour has a long list of achievements including substantial increases in welfare payments and a raft of progressive social legislation including the marriage equality referendum which only happened because the party was in government from 2011 to 2016.

Labour suffered a massive defeat as a result of participation in that government but, in time, its role in saving the State from financial disaster and serious social and industrial unrest will be acknowledged. The party’s achievements should serve as an inspiration to the young TDs who now make up the parliamentary party and give them the courage to rebuild in the years ahead.

With just six TDs Labour will have to find a way of cooperating with other groups in the Dáil. The Social Democrats, led by two former Labour members, are a case in point but there are also some Independent TDs who were formerly members of the party. Labour also shares much of an agenda with the Greens so an alliance of progressive forces as an alternative to Sinn Féin may develop in the 33rd Dáil once a government takes office.

Labour has had its bad days. Back in the 1940s the party was split in two between Labour and National Labour but in 1950, when both served in government, the split was healed and the party gradually recovered its strength. It faces an even bigger challenge today. But our society would be poorer without Labour and its commitment to progressive values achieved by peaceful and democratic means.

1 Miriam Lord: You cannot cocoon democracy – or can you?
2 ‘Everyone still thinks it’s a joke’ - parents of toddler with coronavirus speak out
3 Ireland has strategy to ‘break the chains’ of coronavirus - WHO’s Mike Ryan
4 Cheltenham faces criticism after racegoers suffer Covid-19 symptoms
5 Are holidays booked for July and August going to happen?
Real news has value SUBSCRIBE