For the first time in postwar history, far-right support helped a politician into office 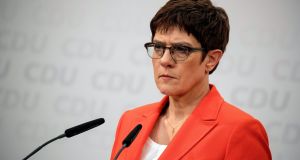 Germany is grappling with its own political watershed. Last week, for the first time in postwar history, a politician was helped into office with far-right support. The vote for a new minister president in the eastern state of Thuringia saw the far-right Alternative für Deutschland (AfD) back the local Free Democrat (FDP) candidate Thomas Kemmerich.

Though he commands just five seats in the parliament, the FDP man was elected minister president ahead of the Left Party incumbent, with the largest parliamentary grouping. It was clear his election hinged on far-right support, but Kemmerich accepted the post anyway – only to hand it back 25 hours later. By then the damage had been done.

he most charitable interpretation of events is that the FDP and the centre-right Christian Democratic Union (CDU), were so fixated on blocking another coalition led by the Left Party that they were blind to the danger to their right.

Some locals see grim parallels to events of 80 years ago when, also in Thuringia, Hitler’s National Socialists secured their first minister post. Others are reminded of the fatal miscalculation in Berlin in 1933 when German conservatives, hungry for power, brought Hitler into play as a useful idiot – only to learn, too late for them and the world, that they were the idiots.

History doesn’t repeat itself and the AfD is not the Nazi party. But its leader in Thuringia, Björn Höcke, likes to cite Hitler in speeches and criticises Germany’s “cult of guilt” over its war crimes. He has made a laughing stock of the FDP and undermined still further the already modest authority of CDU federal leader Annegret Kramp-Karrenbauer.

The most heartening signal from last week is how, within minutes, protesters began gathering outside the Thuringian state parliament. Disproving assumptions that eastern Germany has a weak civil society, angry locals shamed their politicians, who had either forgotten their 1930s history or never learned it in the first place. Eastern voters will not forget last week’s dark day for German democracy.