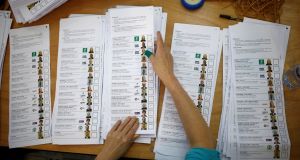 For many voters, Fine Gael and Fianna Fáil were seen as being out of touch as a mood for change became the central dynamic of the campaign. Photograph: Reuters/Henry Nicholls

The outcome of the general election has transformed the political landscape and set Irish politics on the road to an unknown destination. The surge in support for Sinn Féin was the major surprise of the campaign, including to the party itself which would have run far more candidates if it had anticipated the backing it would attract on polling day.

Fine Gael was on the defensive throughout, unable to convince voters its stewardship of the economy and Brexit warranted another term in office. After nine years in government, the party was inevitably going to face a battle but the scale of voter disenchantment came as a shock to it. Opinion polls identified this discontent and indicated it would lose a significant number of seats. But it managed to stem the tide in the last week.

For Fianna Fáil, the outcome will be deeply disappointing. The party hoped to make major gains and to be in a position to lead a stable coalition with the Greens and the Labour Party. The confidence-and-supply arrangement with Fine Gael was designed to win back the trust of voters alienated by the policies that led to the financial crash. But the tactic failed and the gains it was banking on evaporated.

The outcome is a step change in Irish politics, the shape and implications of which will take time to play out. Sinn Féin’s performance is transformative but it is also divisive

For many voters, Fine Gael and Fianna Fáil were seen as being out of touch as a mood for change became the central dynamic of the campaign. That was most pronounced among younger voters and it contributed to the surge in Sinn Féin’s support. The Greens managed to tap into it too but not to the extent expected, while the Labour Party struggled to make any impact.

The desire for something different can be ascribed, in part, to the failure of the outgoing government to respond convincingly to the housing crisis and to the persistent problems of the health service. However, it runs deeper than that. Worryingly, many view politics as complacent and jaded. That sentiment impacted most negatively on Fine Gael, Fianna Fáil and Labour, the parties that have governed the State throughout its history. And many of those who regard those traditionally dominant parties as being out of touch with their everyday lives, had no compunction about voting for Sinn Féin despite its legacy and the questions that – rightly – continue to dog it.

The outcome is a step change in Irish politics, the shape and implications of which will take time to play out. Sinn Féin’s performance is transformative but it is also divisive. The party is within touching distance of government – if that is what it really wants. However, all credible routes to the required 80-seat majority will need at least two of the main parties – Fine Gael, Fianna Fáil and Sinn Féin – to co-operate.

That, in turn, will demand concessions and climb-downs on policies and stated principles. The political positioning and posturing is just beginning and the electorate can have no certainty about what will follow.