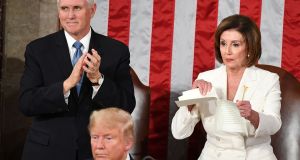 Speaker of the US House of Representatives Nancy Pelosi rips a copy of US president Donald Trump’s speech after he delivered the State of the Union address at the US Capitol in Washington on Tuesday. Photograph: Mandel Ngan/AFP via Getty Images

For American presidents, the state of the union speech is a moment to set out legislative priorities and to persuade Congress to pass big new policy measures. Donald Trump’s address on Tuesday did neither of those things.

It was a campaign rally – a partisan, highly selective and in some instances patently false account of his presidency. Trump spoke of the “great American comeback”, of his “incredible results” in lifting the US economy and of his success at negotiating advantageous trade deals.

The US was “highly respected again”, he said. He spoke in the chamber where he was impeached just weeks ago, yet that particular ignominy did not merit a mention in his speech.

The partial results show a clutch of candidates on respectable numbers, suggesting the Democratic contest could remain competitive for months

The setpiece confirmed that Trump’s agenda for this presidential term has in effect expired. Legislative activity will soon grind to a halt as the countdown to the November presidential election intensifies.

Despite his impeachment, his relatively poor approval ratings and his shambolic leadership of a shameful administration, Trump still has reasons to be hopeful. The economic indicators are solid. So is his support among Republican voters. His acquittal by a Senate controlled by his Republican enablers will bring an end to a saga on which he has fixated in recent months, no doubt emboldening him.

From his perspective, the Democrats’ process for selecting his opponent in the November election has got off to the best possible start: a technical glitch in the reporting of results from the Iowa caucuses meant the party was not, as of yesterday, in a position to declare a winner.

The partial results show a clutch of candidates on respectable numbers, suggesting the Democratic contest could remain competitive for months. That will consume the party’s energy and reduce the time the eventual nominee will have to focus attention on defeating Trump.