The Irish Times view on the diaspora strategy: extending a hand to the ‘global Irish’ 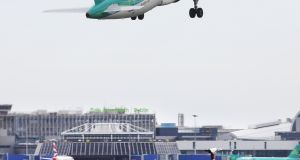 Ireland remains the European country least willing to give votes to its expatriates although the report recommits the Government to a referendum to give votes in presidential elections. Photograph: Sasko Lazarov/RollingNews.ie

The publication by the Government of its “Ireland’s Diaspora Strategy 2020-2025” is an important and welcome affirmation of commitment to a range of diverse communities that make up what the report calls the “global Irish”. Not least the need “to heal relationships” with emigrants who left Ireland in crisis.

These communities of “citizenship, heritage and affinity” “include Irish citizens living overseas, both those born in Ireland and those born abroad to Irish families, as well as the heritage diaspora, those many millions of people of Irish descent around the world. It also embraces the reverse diaspora of people who have lived, studied or worked in Ireland before returning to their home countries as well as the affinity diaspora who hold a deep appreciation for our people, places and culture.”

An estimated 80 million people worldwide claim some Irish descent, including more than 36 million Americans who claim Irish as their primary ethnicity though, significantly, this report does not engage in the near impossible task of quantifying the relative scale of these overlapping groups.

These communities of the diaspora have different needs, from welfare to cultural, to economic networking and simply keeping in touch, and the report pledges to put in place the means to reach out to them, and to target specific groups such as women, LGBT, travellers and the Irish of mixed heritage. The global Irish have, in differing degrees, also a sense of ownership of the old country, that we have been traditionally less willing to acknowledge let alone give real meaning to. For many of us there remains a real difficulty in defining the point at which departing citizens acquire that degree of otherness that sets them apart, although remaining nationals.

Ireland remains the European country least willing to give votes to its expatriates although the report recommits the Government to a referendum to give votes in presidential elections. That is a symbolic acknowledgment of a share in ownership of the country, while still refusing to share in its rule. Some 115 countries and territories – including nearly all developed nations – have systems in place to allow their emigrants to vote while some, like the French, go as far as granting full voting rights in presidential and parliamentary elections, regardless of how long their citizens have lived abroad.

If the diaspora has needs of us, we too have needs of it, although the outreach, particularly the developing business networking, must not simply be seen as a cynical means of harnessing a vast untapped resource.

There is nothing dramatically new in this report, but the restatement and drawing together of disparate elements of existing policy give coherence and a mainstreaming impulse to this important work. It should not be allowed to gather dust.