As new fighting escalates in Ethiopia’s semi-autonomous Tigray region, the nightmare prospect of war is being revived 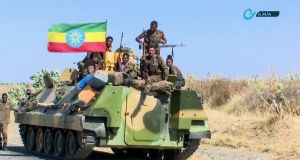 War, Abiy Ahmed said as he accepted the Nobel Peace Prize last year, was “the epitome of hell”. As new fighting escalates in Ethiopia’s semi-autonomous Tigray region, that nightmare prospect seems to be reviving. Tigray is the mountainous north-west corner of Ethiopia, bordering Eritrea and Sudan. It accounts for some seven million of Ethiopia’s population of 110 million, but its leaders and soldiers have traditionally played a key part in the country’s rule.

Ethiopia’s prime minister Abiy came to power in 2018 after years of anti-government protests, economic troubles and unrest, on the promise to reconcile a country on the brink of collapse.

Early promise and the ending of hostilities with Eritrea, which led to the Nobel prize, brought him much praise internationally but his centralising reforms sidelined and alienated several ethnic communities and in particular the Tigrayan leadership and its Tigray People’s Liberation Front (TPLF). Disputed elections had seen the regional parliament re-established to Abiy’s displeasure.

He sent the army to Tigray on November 4th, allegedly in response to an attack on a government military post and attempts to steal arms. The TPLF denies the charge and has accused Abiy of concocting the story to justify the offensive.

Addis troops are now closing in on the regional capital Mekelle and the conflict has seen hundreds killed on both sides. It also threatens to destabilise other parts of Ethiopia and the Horn of Africa. Tigrayan forces fired rockets into Eritrea at the weekend, and more than 25,000 refugees have fled to Sudan. Observers warn there is an immediate danger that both neighbours and others may become embroiled, turning Ethiopia – Africa’s second most populous country – into another regional conflict like Libya.

The UN and the African Union are pressing urgently for talks. The UN has also warned that reported mass killing of scores or even hundreds of civilians in Tigray by TPLF troops – denied by them – “would amount to war crimes” if confirmed. It has called for an independent inquiry.