The Irish Times view on pensions: hard decisions must be faced

To make the pension system affordable, changes are needed as the population ages 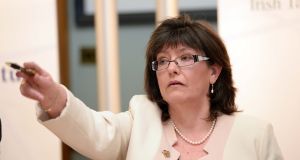 The Pensions Commission, led by former Revenue Commissioner chair Josephine Feehily, has an important job and it is vital that it does not get bogged down in interminable delays and discussions. Photograph: Eric Luke

The recent establishment of a Pensions Commission to examine State pension provision is an initiative born out of a need, when the Government was being formed, to delay a difficult decision. Nonetheless the commission, led by former Revenue Commissioner chair Josephine Feehily, has an important job and it is vital that it does not get bogged down in interminable delays and discussions. The key issues may not be easily solved, but they are clear.

The Sate pensions – contributory and non-contributory – are the bedrock of income provision for retired people. The central difficulty is that the population is ageing, pushing up the cost of provision and threatening to impose a serious burden on the exchequer finances in future. Already, partly due to the impact of Covid-19, the social security fund out of which pensions are paid is moving into deficit.

There are other issues too in terms of the fair and adequate provision of pensions, particularly to those – typically women – who leave employment for a period. But the affordability issue is key.

The decision to appoint the commission sprang out of uncertainty over what to do about the age of retirement. It had already risen to 66 and was due to go to 67 next January and subsequently to 68. This was a live issue in the general election campaign, particularly the unacceptable situation were people were forced to sign on for unemployment benefits for an interim period.

However the core probolem remains. To make the pension system affordable changes are needed as the population ages. Increasing the pension age is a clear way forward. If not, then other solutions are not very palatable. Entitlements can be reduced over time – not a good idea given the reliance of many on the State pension for retirement income. Or, in the case of the contributory pension, the shortfall can be met from higher PRSI contributions.

Of course the politically easy way out is to say that it can all be funded from general taxation. But Covid-19 has put the exchequer heavily into the red.The expert view, from the Irish Fiscal Advisory Council, for example, is that we are already facing the need for some tax rises in the years ahead to deal with the pressure facing the exchequer. We cannot afford to rely on general taxation to also pay a rapidly rising pensions bill – heading €1 billion higher even four to five years.

One possible way forward would be reinstate the plan to increase the retriement age, but ensure that companies do not put a forced retirement age of 65 into contracts. Higher PRSI payments may also come into the mix, particularly taking into account the likelihood of higher entitlements in other areas. We need to find a sustainable and fair way to organise and fund all this and the work of the Pensions Commission can make an important contribution to this.