The Irish Times view on Brexit: Bracing for Boris

Boris Johnson is more than capable of betraying Brexiteers, but he is running out of time 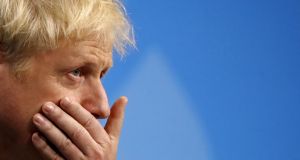 The imminent arrival of Boris Johnson in Downing Street – a prospect that would have been dismissed as madcap just a few years ago – is a measure of the malaise infecting British politics. Photograph: Tolga Akmen/AFP/Getty Images

Theresa May has been one of the UK’s worst postwar prime ministers – a stubborn, unbending presence who, at a time of crisis, when leadership and strategic imagination and creativity were required, could respond only with dogma, prepared scripts and a tragic obsession with the narrow interests of her own party. Very soon, Britain – and the rest of Europe – may wish she was still in power.

The imminent arrival of Boris Johnson in Downing Street – a prospect that would have been dismissed as madcap just a few years ago – is a measure of the malaise infecting British politics. Only a dysfunctional political culture could conclude that a showman with such limited ability, such disqualifying flaws and such a meagre track record is the man to lead its government at this dangerous moment.

In Dublin and other EU capitals, optimists will seek solace in two things. First, Johnson’s limitations could, counter-intuitively, make it easier to strike a workable deal that would avoid the disaster of a no-deal Brexit. It’s not merely that his famous ill-preparedness, weakness on detail and lack of focus will make him a poor negotiator, though that is true. More importantly, this is a man of few discernible fixed views, little interest in consistency, and with an unending capacity for self-contradiction. That implies that his positions on Brexit, which have already swerved wildly, are softer than his interventions during the Tory leadership campaign suggest, and that he would be much quicker to sign up to the withdrawal agreement, perhaps with some superficial tweaks, than to push his country over the no-deal cliff.

Second, Johnson’s mandate – and his popularity within his party – give him the freedom to betray the hard Brexiteers and know that he will survive. Johnson is driven above all by a yearning for power. Presiding over a no-deal crash would imperil his leadership and come at a huge cost to his party. That makes him much less likely to opt for it; having spent his career trying to get into Downing Street, he won’t be in a hurry to leave it. The House of Commons had been inching towards acceptance of May’s withdrawal deal, let us not forget. While the leadership campaign has caused the rhetoric to harden, Johnson, given his fresh mandate and his credibility among Brexiteers, is better placed than anyone to coax his colleagues away from the cliff-edge.

That’s the best-case scenario. Unfortunately, it assumes two things: that Johnson is in control of events and that he understands the dire cost – to him and his country – of a no-deal. Neither of these is guaranteed. The UK is due to leave the EU on October 31st. That doesn’t leave much time. The danger is that Johnson’s no-deal threat becomes a self-fulfilling prophecy. And that by the time he finally realises the need to step back from the brink, it will be too late.