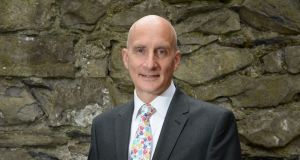 An anti-Brexit British Labour peer has predicted a “deep parliamentary crisis” in the UK in October and an extension of the negotiating period “as Boris Johnson hits reality” .

Lord Adonis, who wants a second vote on the UK’s decision to leave the EU, said that it was “virtually certain” that there would not be a no-deal Brexit by the next deadline of October 31st given that a majority are opposed to a crash-out exit, despite threats by Mr Johnson, the frontrunner to be the next British leader.

Speaking before addressing the Institute of International and European Affairs think tank in Dublin, the former Labour minister said a majority vote by MPs this week to stop a new prime minister suspending parliament to force through a no-deal Brexit was “almost unprecedented” in UK parliamentary history.

The anti-Brexit campaigner said that what made the votes this week “even more extraordinary” was that a quarter of the Cabinet, led by outgoing chancellor Philip Hammond, abstained.

He expected the same majority to block a no-deal Brexit in September and October.

“I cannot see a scenario where there would be a parliament majority for no deal. And the fact that Boris Johnson has been bigging it up is largely irrelevant because he doesn’t have a parliamentary majority,” he said.

Lord Adonis described Mr Johnson as a “naked opportunist who doesn’t believe in Brexit but went along with it because he thought it would propel him to the leadership of the Conservative Party”.

The Labour politician, who was transport secretary in Gordon Brown’s government in 2009 and 2010, said he did not foresee “a hard Brexit” either following Mr Johnson’s election or a general election.

The only viable way for Mr Johnson to win an election, he said, was to form “some kind of electoral pact” with Nigel Farage’s Brexit Party, but that would mean “handing over the leadership of the Conservative Party”.

While saying this would be unlikely, he said that if it happened, it would “massively energise” the centre and left of British politics. It would guarantee the loss of the remaining Conservative seats in Scotland and a “significant liberal democrat revival across provincial England”

“So the most likely course in my view is a deep parliamentary crisis in October, as Boris Johnson hits reality and then a further extension of the article 50 negotiating period, probably to hold a referendum,” he said.

Lord Adonis backed Taoiseach Leo Varadkar’s strong defence of the “backstop” - the mechanism in the proposed Brexit deal to avoid a hard Irish border - saying that weakening his commitment to it would lead to “an existential crisis” for Mr Varadkar and the Republic as it would necessitate “new border arrangements.”

“Assuming that the Taoiseach remains committed to the backstop, the backstop will be an unavoidable part of any deal with the European Union, ” he said.

The Labour peer said that he has always been in favour of someone other than Jeremy Corbyn - a “historically anti-European” figure - leading Labour but that he did not think Mr Corbyn’s leadership would affect the party standing “four square behind remaining in the EU” in “any conceivable referendum.”