Brexit compromise acceptable to all sides likely to prove elusive

Cliff Taylor: The route to a deal between Boris Johnson and the EU looks impossibly narrow 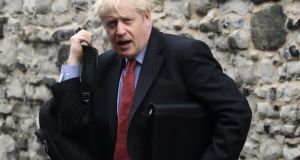 Leadership candidate for Britain’s Conservative Party Boris Johnson: to head towards a no-deal, he will tout non-existent alternatives, say they mean the backstop guarantee is not needed and try to blame the EU – and Ireland – for a lurch towards a no-deal. Photograph: Simon Dawson

Can Boris Johnson strike a deal with the EU to avoid a no-deal Brexit? Of course the first issue is whether he really wants to try. But if he does , any kind of agreement between the EU and UK to break the Brexit logjam is going to require a big fudge.

There are simply no clean solutions and no negotiated compromises which meet the political requirements of all sides and respect everyone’s “red lines”. So a no-deal exit, or some political upheaval in the UK as the parliament seeks to stop this – perhaps triggering a general election or a second referendum – are perhaps more likely routes to stopping a no-deal Brexit for now anyway. The road towards a compromise is so narrow and so fraught with difficulty that it will be hard to find. Even if some delay is agreed to the end October deadline, this will remain the case.

It is as it always has been for the UK. The so-called Brexit trilemma will exist for Boris Johnson in exactly the same way as it did for Theresa May. The UK can choose two of the following three goals – leaving the EU single market and customs union; avoiding a hard Irish border; and having the same approach to Brexit across all of the UK. But it can’t have all three.

To try to find a way through this, the UK government and the Brexit lobby have proposed a range of alternative arrangements, ways to avoid a hard border without accepting the backstop plan. Some of these are nonsense. Some could help a bit. But we are a long way off finding some alternative to the backstop. And no magic solution will be found by October 31st.

If Boris Johnson wants to head towards a no-deal, he will tout these non-existent alternatives, say they mean the backstop guarantee is not needed and try to blame the EU – and Ireland – for a lurch towards a no-deal. This would be in line with his “bin the backstop rhetoric”. It remains to be seen, if he sets this course, whether the UK parliament will be able to stop him, though events this week confirm a large majority in the House of Commons remains against a no-deal, and warnings of its risks and consequences will grow ever louder.

What if Johnson wants to talk turkey and see if a way can be found to a compromise to get the withdrawal agreement through the House of Commons? What if he can present some proposal for which he can claim support from the UK parliament? Then the question from our EU partners will be “What do you think, Dublin”?

But here’s the thing – there really is very little middle ground here. There is no “win-win” outcome. A time limit on the backstop, or some way of allowing the UK to choose to exit, would risk rendering the whole thing much less valuable to Ireland. Some beefed-up review mechanism would still threaten to leave the UK “stuck” in the EU customs union. A concession by the UK that it wanted a trading relationship sufficiently close with the EU in future to avoid the need for the backstop would mean giving up the cherished Tory goal of striking new independent trade deals across the world.

The most likely negotiated route forward would be to accept that Northern Ireland be treated differently to the rest of the UK and effectively remain a member of much of the EU’s single market. This avoids a hard border and lets the rest of the UK leave the EU’s trading bloc and be free to set its own trade policy.

This idea of carving the North out from the rest of the UK and keeping it aligned with the Republic was, of course, the original backstop plan which came from Brussels. It was rejected by Theresa May, in favour of a more complicated plan involving all of the UK staying aligned to the EU customs regime. Going back and accepting that the North would be treated differently and stay subject to some rules set in Brussels would meet strong objections from the DUP. Unless some fudge can be found.

Taoiseach Leo Varadkar was in the same territory last week when he proposed that Ireland North and South remain in the same regime for food and animal safety – effectively the EU regime– though this was in the context of avoiding Border checks if a no-deal happens. The necessary checks on animal and food safety could then take place at Irish ports as animals and food entered from Britain, rather than at the Border itself. Other necessary customs and regulatory checks could take place at company premises or via spot checks, he suggested.

This did echo some of the original backstop plan from Brussels. However, crucially, the original plan was surrounded by EU safeguards, overseen by the EU courts and so on.The danger for Varadkar is that this proposal could be seen in Brussels as an attempt at a bilateral deal between Ireland and the UK which Brussels does not want– even if this was not his intention.

As this goes on, we underestimate the European determination to protect the EU single market at our peril. A key issue, for example, in relation to any checks to be conducted on animals will be an assurance that these are done properly and in full compliance with EU regulations.

There will be no fudging on this one. And remember that the EU side is already irked at Ireland’s reluctance to outline how checks would be conducted after a no-deal at the Border and how the single market would be protected. We can expect to see these tensions spill out into the open if a no-deal looms.

In the meantime, the search for a compromise will not be easy.The problem is that one that all sides can sign up to may simply not exist.

2 Dara Ó Briain reveals his quest for his birth mother: ‘She said there was no choice in this’