If Johnson becomes PM, he should thank Varadkar, says historian 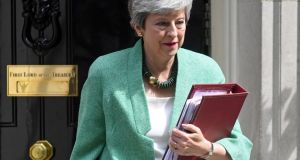 British prime minister Theresa May: “It is more likely...that history will show that the backstop brought about the collapse of the May government, the succession of Boris Johnson, and perhaps a no-deal Brexit...”

Brendan Simms is the quintessential European. Raised in Ireland, the son of a German mother, he is the grand-nephew of a Irish communist who became a Russian spy, dying later in a Russian gulag.

Today Simms is a highly-regarded academic studying the relationship between the English, and then later the British, with Europe, especially in his seminal work, Europe; The Struggle for Supremacy, 1453 to the Present.

Speaking in his book-lined rooms at Peterhouse College, Cambridge, Simms questions Ireland’s handling of the Brexit negotiations, arguing that Taoiseach Leo Varadkar has, if unintentionally, breached the letter and spirit of the Belfast Agreement.

He says one of the great achievement of Irish foreign policy since independence has been the uncoupling of the Irish-British relationship, and the growth of a broader European identity for the Irish.

“Unfortunately the strategy pursued by the Taoiseach, and I understand why he pursued it, has been one that harks back to the 16th, 17th and 18th centuries, and that has not worked in the past. I don’t totally exclude it working today, but it seems to me very unlikely.

“The great tragedy would be if the EU were now to drive the two states, and the four nations [of Scotland, Wales, England and Ireland] apart, and that’s the great problem for the Taoiseach,” says Simms.

The historian, who travels to Skibbereen next month to speak at the West Cork History Festival, argues that Varadkar has favoured the interests of nationalists in Northern Ireland over unionists, and violated the terms of the Good Friday agreement during Brexit talks. Since Varadkar refuses to permit checks at Border crossings in Ireland because they are not acceptable to nationalists then he should have equally refused to create one in the Irish Sea.

Instead, Varadkar should have argued that “if erecting an intrusive customs border north-south is a violation of the Good Friday Agreement, in that it compromises the national identity of Irish nationalists in the North, then erecting an equivalent border in the Irish Sea automatically violates the British identity of Northern unionists”.

“It seems to me extraordinary that the Dublin Government should demand such a violation, and that virtually nobody as far as I can see in Irish civil society has pointed this out.”

Today the 52-year old academic, who has written widely on European history and politics, is professor of the history of international relations in the department of politics and international studies at Cambridge University.

In his book Britain’s Europe; A Thousand Years of Conflict and Cooperation (2016) he argues that Britain’s role has always been to prevent the domination of the continent by a single power.

Despite the warm sunshine on the yellow stone facades of 13th century Peterhouse, the oldest of the Cambridge colleges, Simms fears a chilly autumn as the October 31st deadline looms.

“If, as looks likely, a no-deal Brexit goes ahead, this clash will be the biggest seen in decades, with unforeseen consequences for trade, for defence, for fisheries.

‘We are now in a completely topsy-turvy world. If the backstop is accepted the Irish Republic will have a greater role in the running of important parts of the UK economy than the British themselves.

“That is possible. It is more likely, however, that history will show that the backstop brought about the collapse of the May government, the succession of Boris Johnson, and perhaps a no-deal Brexit, something that I personally contemplate with considerable trepidation.

“It is often said that Johnson’s first call after becoming PM will be to Donald Trump, but if he has any decency it should be to thank Leo Varadkar. He would not have become prime minister without him,” he tells The Irish Times.

Simms was brought up in Sandymount and educated at the German-language school St Kilian’s in Clonskeagh, Dublin. He studied at Trinity College, Dublin, where he was elected as a scholar in 1986.

In that role he followed in the footsteps of his father David Simms, a professor of mathematics at TCD. His German-born mother, Anngret Erichson, was an academic too, becoming associate professor of geography at UCD.

“People always assume I am a Sandymount Protestant,” he says, with a smile, though he was actually raised as a Catholic and he is a grand-nephew of the leading Church of Ireland ecumenist and scholar, former Archbishop of Dublin and Armagh, Dr Otto Simms.

Indeed his background is more diverse since he is also a grand-nephew of Irish communist Brian Goold-Verschoyle, who became a Soviet spy and died in a Russian gulag in 1942.

A founder member of the Henry Jackson Society, a neo-conservative British foreign policy think-tank, Simms says: “My line has always been that mainland Europe needs to become a state like the United States and then it needs to confederate with the United Kingdom.

“The meta-intellectual point I am trying to get across is that England is not the problem, mainland Europe is the problem,” says Simms.