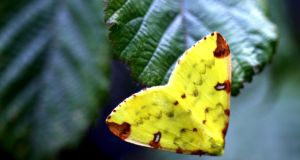 One of the side-effects of the heatwave, or so I assume, has been the invasion of our house by moths. They’re not yet as numerous as the ants that mass on the borders of the living room every April and march on the kitchen in May, as if to celebrate International Workers Month. But they are still multiplying, so with no end in sight to the tropical weather, their occupation may not have peaked.

As with the ants, it’s hard to detect any pattern to the moths’ behaviour. If they’re operating to a plan, with particular targets, we haven’t noticed yet. The assumption, however, is that like those dodgy charity collectors who call to our door occasionally, it’s certain kinds of clothes they’re after. Or maybe carpets, of which we have few.

For a warning of what may be to come, I was alarmed to read something in the Spectator magazine of late, by Charles Moore. Moore’s problems would not usually coincide with mine. An Eton-educated, pro-Brexit former editor of the Daily Telegraph, who visits Ireland occasionally to buy hunting horses, he and I move in widely different social spheres.

He also lives in the far south of England, where I imagine they get a better class of moth.

But it being even warmer there, they also get them in great numbers.

Among other things, he wrote that his wife had identified “808” different species in their garden, which forces one to reflect on wife and garden alike with awe. Of the ones indoors, meanwhile, he says that they have destroyed “a Kenya rug, two overcoats, a hunting coat, a pair of jodhpurs, a suit, any number of jerseys[,] and the baize of a billiard table.”

I took the liberty of inserting an Oxford Comma in that, by the way – there was none in the original, perhaps because Moore went to Cambridge.

But as for his inventory of moth destruction, I was relieved to note only a small overlap with things I own.

I have a suit, it’s true. And I too have “any number of jerseys”, including some white-and-blue ones of great sentimental value. Alas, following an attack last Sunday by the lesser-spotted Lough Erne blanket moth – a ravenous green creature that thrives on the smell of hubris – the jerseys may not be much needed this summer anyway.

You wouldn’t know it from our house, but moths in general are under threat. The rarer kinds are disappearing in the face of intensive agriculture. And even though the ones plaguing us are not visually interesting, they did inspire me to look up such reference works as the website irishmoths.net and marvel at the variety of species.

Even the names are fascinating: the “Shark”, the “Grey Dagger”, the “Red-necked Footman”, the “Quaker”, the “Lackey”, the “Drinker”, the “Hebrew Character”, etc.

Often these are simple descriptions of some physical feature. But moths do seem to bring out the poetry in scientific classifiers.

It’s no surprise that actual poets write about them too.

They were a favourite theme of WB Yeats, for one, although in his case, it wasn’t the insects themselves so much as the time of their appearance – the “moth hour” – that excited, suggesting magical possibilities. Yeats was not much of a drinker, but the Moth Hour did for him what the Happy Hour does for others.

It’s a recurring theme in the Ballad of Father Gilligan, for example, where the weary old priest falls asleep in his chair when he should be at a parishioner’s deathbed, and wakes racked with guilt, to find that a merciful spirit has taken his place while he slept.

Elsewhere, in perhaps the loveliest of Yeats poems, it is also “when white moths were on the wing/And moth-like stars were flickering out” that the silver trout in Song of Wandering Aengus turns into a “glimmering girl”, who will haunt the narrator for the rest of his days.

In like romantic vein, if less poetically, we might assume a connection between moths and the old Dublin word for girlfriend: usually spelt “mot”, but often pronounced with silent “t”, as in “me moh”.

The related concept of attraction to flames, old and new, supports an amorous connection. But the mott/moth analogy would need reversing in the famous case of Yeats and Maud Gonne. She was the 100-watt bulb, he was the insect dancing around it. And in any case, it seems, there is no link. The Dublin “mot” is thought to descend from the Middle English “mote”, meaning a small (but by inference precious) thing.