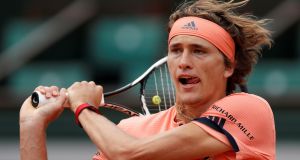 Alexander Zverev: “Where you from, buddy?” Photograph: Gonzalo Fuentes/Reuters

After winning a match at the French Open this week, the tennis player Alexander Zverev found himself being interviewed by a man from the BBC, whose accent he struggled to follow. Professional tennis players are used to coping with heavy ball-spin.

But as the words of Jonathan Pinfield broke this way and that before him, Zverev just couldn’t get to the bounce.

Ironically, the gist of Pinfield’s question was why the player’s successes on the ATP tour hadn’t yet “translated” into the majors. This was lost on Zverev, however. So, while stroking his chin and smiling, he heard the BBC man out and replied with another question: “Where you from, buddy?”

When Pinfield explained he was from “Yawk-sher in England”, there followed some good-natured banter in which Zverev expressed an interest in visiting any tennis tournaments they might have there.

He also professed his love of the accent, with one proviso: “I couldn’t understand a word you’re saying, but [that’s] not important”.

He was right about this, anyway. The exchange was a lot more interesting than most of the paint-dryingly dull stuff that passes for post-match tennis interviews.

But it also illustrated just how rare it is to hear accents as particular as Pinfield’s in any international broadcasting context.

Zverev is a German, of Russian parentage. So of course he speaks fluent English in a Californian accent. Or, more likely, he speaks Globish: the limited, idiom-free subset of English gradually taking over the planet.

The name was coined earlier this century by a French computer engineer to describe an estimated 1,500 English words, including basic grammar, that most business travellers now have, and which is enough to allow any multinational roomful of executives to communicate.

There’s the rub for native English-speakers, including Ireland’s. On the one hand it’s a big advantage that we can communicate with so many other nationalities whose own languages we’re too lazy to learn. On the other, the more colourfully we speak English, the less sense we make to those who have only Globish. This is a particular problem for Irish people, who in speech – God knows – can be colourful to a fault.

It hardly needs saying, by the way, that Pinfield’s accent would have presented no great difficulty to anyone this side of the Irish Sea. Even before he identified his origins, I could probably have guessed Yorkshire, if only because he made “Roland Garros” sound like a Huddersfield full-back.

But then it’s possible we have a better understanding of English northern accents that some people in southern England do. Consider a thing I read a while back about another BBC presenter, Steph McGovern.

It said of her that, “like many people from Middlesborough, [she] pronounces ‘poor’ as ‘poo-ah’ and rhymes ‘grass’ with ‘mass’, not ‘farce’.”

Apparently, this marks you out as eccentric in British broadcasting, although leaving “poo-ah” aside, almost everybody in Ireland rhymes “grass” with “mass”. You’d be considered a bit up your own (word that rhymes with “farce”) to do otherwise.

McGovern was being mentioned in the context of Britain’s accent wars, in which certain types – usually southern ones – are judged more prestigious. It’s argued that, conversely, those who don’t speak “proper” can suffer discrimination. So there is now a campaign afoot to protect marginalised accents by including them in British equality legislation.

That might have sounded a bit extreme here, at least until last week.

Then the (London-born, Oxford-educated) journalist Rachel Johnson made a joke on Twitter about Sky TV’s coverage of our abortion referendum.

At least I think it was a joke, albeit the wit involved was not so much of the rapier kind as the sledgehammer. In any case, Johnson congratulated Sky’s reporters for the quality of their coverage, and especially the way they “helped comprehension (in mainland UK) by speaking in clear English not Gaelic throughout”.

The most charitable explanation for this is that she had heard some of the Dáil debates, perhaps involving Mattie McGrath or the Healy-Raes, and assumed they were in Irish.

More damningly, it sounded like something her brother Boris might say, as an ice-breaker at a summit on Brexit.

Nobody invited her to any tennis tournaments.