Pro-lifers must regroup in the shadow of the mainstream 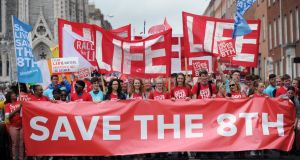 The removal of the Eighth Amendment from Bunreacht na hÉireann is undeniably a devastating setback for the pro-life movement in Ireland. It obliterates what appears to be the last line of legal protection for the unborn, and hands a resounding electoral mandate to our political leaders to press ahead with their plan to legalise unrestricted abortion up to 12 weeks.

Many pro-life citizens, activists and leaders are feeling devastated and emotionally drained, not only because of the energy they poured into this David-and-Goliath campaign, but because of the implications of this defeat for the lives of thousands of unborn children in our country, who are now threatened by a legal and medical environment that is less sensitive to their dignity and worth than ever before.

But this referendum, much more than a legal and political setback, is a bracing wake-up call for those of us who thought, or hoped, that the battle to protect a life-affirming ethos in Irish society would be carried out for the foreseeable future under the shelter of a pro-life Constitution, a pro-life medical establishment and/or powerful pro-life allies in Dáil Éireann.

Indeed, the removal of the Eighth Amendment from our Constitution represents a watershed moment for the pro-life movement in Ireland. It robs them of a crucial legal instrument for “holding the line” against the normalisation of abortion in Irish hospitals and society, and hands a massive legal and political advantage to the pro-choice movement. Pro-life citizens and activists cannot reasonably hope for significant victories in the political and legal arenas for many years to come, certainly nothing that comes close to the restoration of the Eighth Amendment.

These changed conditions demand a significant change in strategy. A pro-life movement deprived of political, media and legal support must, in a sense, go “back to basics” and turn its attention overwhelmingly to the culture in which politicians, journalists, lawyers, doctors, and ordinary citizens are formed. It must find a way to instil a pro-life ethos in a culture whose younger generation is more tolerant of abortion than their parents or grandparents, and whose mainstream media and political establishment have shown themselves to be unsympathetic to the pro-life cause.

In my view the time has come for pro-lifers to accept that they are now a dissenting minority, marginalised from the most influential platforms of Irish culture. Abandoned by the political and media establishment, and operating in a legal and political wilderness, the great challenge now confronting the pro-life movement in Ireland is to build up an infrastructure of cultural influence and formation that does not depend on the support, patronage or goodwill of politicians and mainstream media. Such an infrastructure could include alternative online media, support groups for families and single parents, counselling services for pregnant women, support networks and legal assistance for conscientious objectors, and a revitalisation of parish communities.

Some lessons can, perhaps, be drawn from the Solidarity movement under communist rule in Poland, which managed to organise a successful grassroots resistance movement based on organised labour and a dissident Catholic Church. The Solidarity movement distributed literature and organised meetings in defiance of repressive communist laws. It effectively wielded a cultural influence that could rival that of the communist state. Admittedly, they enjoyed the support of a spiritually and culturally vibrant church. Nonetheless, their strategy, to effectively bypass mainstream institutions and create their own, is surely relevant for a pro-life movement that has practically lost its voice in Ireland’s mainstream media and political establishment.

For some, operating at the margins of the establishment may seem rather unglamorous and may even appear defeatist. But many of the greatest movements for justice and civil rights, from the anti-slavery movement in the US and Britain to Solidarity in Poland, were born in the shadows of mainstream culture and politics, far from the corridors of power and political correctness. Their victories took time and preparation, and demanded great personal sacrifice, toil, and perseverance. But their perseverance and powerful witness paid off, and should serve as a powerful example and inspiration to present and future generations of pro-life citizens in Ireland.

1 ‘It was pitch black’ - Rescued teenager describes night afloat with her cousin in Galway Bay
2 Conor Pope’s staycation diary: ‘It’s like I’m staring at a Polaroid of my childhood holidays’
3 Irish team wins international competition with dementia app
4 Aaron Brady, the man who said with pride he was a cop killer
5 Garda killer Aaron Brady will be almost 60 by time he leaves prison
Real news has value SUBSCRIBE