Abortion legislation should not be delayed by conscience questions 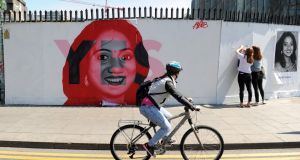 The Savita Halappanavar mural in Dublin. ‘Conscientious objection carries with it the obligation to transfer the care of a woman to a practitioner who will provide the abortion sought.’ Photograph: Aidan Crawley

In getting a regime operating as soon as possible, and operating properly, it should be remembered that many thorny issues have already been thrashed out within an Irish context. Further, the experience of other countries, their success and their pitfalls, is instructive.

This is evident in the current debate on the role of conscientious objection within the law. Conscientious objection is not, as some would believe, a right. It is limited to not obliging a person to carry out something lawful if it runs contrary to his or her conscience. It may only be invoked by an individual and cannot be adopted as the policy of an institution. Importantly, and often overlooked, conscientious objection is critical in protecting women who avail of a lawful service from moral disapproval, overt or otherwise.

Importantly, conscientious objection carries with it the obligation to transfer the care of a woman to a practitioner who will provide the treatment sought. In the context of termination, some quarters argue that the requirement for onward referral is tantamount to providing a termination itself and therefore morally repugnant.

The simplicity of this argument is attractive. However, it is an argument that must be resisted. Ethically and legally where conscientious objection is invoked, a continuum of care must be provided. Individual ethos must not trump the ethic of care that is owed to a patient.

Striking a balance between objection on grounds of conscience with a woman’s right to healthcare is not new within Ireland. Conscientious objection is currently provided for in the Regulation of Information Act (Services outside the State for Termination of Pregnancies) Act 1995 which regulates the giving of information about services that provide lawful terminations in other countries.

This law does not state that referral is necessary where conscientious objection is invoked. However, drawing on the unequivocal professional ethical guidance within Ireland and the legal experience of other countries, the need for appropriate referral, based on an ethic of care for a woman, was always stressed.

The Protection of Life During Pregnancy Act 2013 advanced the law in positively asserting this obligation to transfer the care of a pregnant woman where conscientious objection was invoked. This was an important development in copper fastening the position in law and it must not be ameliorated in any way in the new legislation.

The experience of conscientious objection in other countries is instructive. Absolute clarity is required as to who may opt out and what precisely may be opted out of. The United Kingdom courts have considered this issue and found that, for example, an administrator in a service that provided abortion was not entitled to invoke a conscientious objection clause. Equally two midwives who were contracted as part of their employment to supervise the carrying out of terminations were not entitled to opt out.

In the case of the midwives, this involved a recent lengthy battle from the Court of Session in Scotland to the Supreme Court in London. In the end the decision came down to an interpretation of the precise wording of the law.

Following this case, a Private Members Bill seeking to extend the circumstances in which a person may invoke conscientious objection is currently before the House of Lords in the UK.

This Bill is sponsored by the Northern Irish crossbench peer Nuala O’Loan who expressed her views during the referendum campaign on the No side of the argument. It will be interesting to see how the UK parliament, which has had experience of legalised abortion since 1967, considers this.

The experience in other countries also points to very practical matters such as the need to agree a timely method of communication of conscientious objection within services so that understaffing does not arise. The transfer of care must also be made in a timely manner, especially where different criteria apply to different periods of gestation.

For so long matters surrounding sexual health in Ireland have been secretive rather than private. Years of dedication and professionalism exist that extend far beyond supporting women to travel. The experience of the Health Service Executive’s Sexual Health and Crisis Pregnancy Programme in promoting positive sexual health and supporting crisis pregnancies should not be overlooked.

While woman’s autonomy around health has been bolstered by the result of this referendum, the advisory body that oversees the HSE national consent policy may be well-placed to consider the potential rights of the father of the unborn where termination is being considered as well as any rights of parents where the pregnant woman is herself a child.

The result of the referendum does not nullify the complexities that surround a woman’s choice to terminate. Nor will the framing of legal termination and clinical guidance be straightforward and immune from potential legal challenge. Let time and thought be given, and existing experience drawn upon, so that what is proposed is ethically motivated and legally robust. Women and the practitioners who will provide these services deserve no less.

Jenny Bulbulia is a barrister at law and provides advice and training on sexual health, crisis pregnancy and child protection