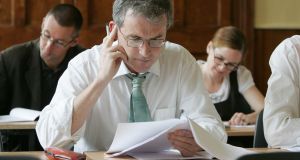 The most dazzling compliment I ever received from a school-teacher was delivered one day in English class, circa 1978, by the late Mr O’Brien. I realise that when they hear it now, some cruel readers may laugh.

But all I can say is that it did not then have the slight satirical quality it has acquired in years since.

On the contrary, Mr O’Brien was a genuine fan of my work.

So much so that, when marking essays, he would sometimes hold mine back until last, the better to draw attention to some example of excellence from which the other wretches in honours English might benefit.

And sure enough, on this occasion, he went through all their essays first. Then he picked up mine, with an affectionate smile. I have no memory of the topic, or what the thing he liked so much about it was. But having read the extract and allowed my classmates time to savour it – more than they needed, I’m sure – he proceeded to make a general point about the Leaving Cert exam then looming.

First he surveyed the whole room and declared that everyone, with sufficient work, could get honours. There was no-one who could not hope for “at least a Grade C”, he added. “But you,” he said, turning to me, and – I sensed – conferring responsibility along with the high praise he was about to deliver: “You could get a B”.

I’m not sure how long after this it first occurred to me that (whisper it) an A might have been considered possible too.

It certainly didn’t occur then. Yes, even in those days before grade inflation, we must have heard of people getting As in English.

I can’t recall all the things I did wrong that day, but the least forgivable was not reading the paper properly and omitting a compulsory question

But if we did, it was probably in Dublin somewhere, and for all we knew, money had changed hands.

Those were the Himalayas, in any case; we were aiming for the Alps. A Grade B was the dizzy summit of my ambition, and I might need oxygen equipment even to get that far.

Still, with Mr O’Brien’s endorsement, I would try.

Then the exam happened, and if it had been on a mountain, I would have had to be airlifted off it to safety.

I can’t recall all the things I did wrong that day, but the least forgivable was not reading the paper properly and omitting a compulsory question. Two months later, I was the owner of a Grade D: personal humiliation worsened by the shame of letting my teacher down.

Oh well. I was still only 16½. Not having a better life plan yet, I decided to repeat the Leaving Cert. I could give up some subjects, and take on new ones. And I could have another go at English, getting that elusive B at the second attempt.

Some days, I almost felt the flames of foreign war-zones rising from the pages, although on one occasion, they turned out to be actual flames

Maybe even Grade A was beginning to appeared on the horizon. I must have heard of such things by then, because I had started buying The Irish Times, where A grades were common currency.

The newspaper habit, considered weird by contemporaries, foreshadowed a vocation. I could happily lose myself in reading about the world’s troubles.

Some days, I almost felt the flames of foreign war-zones rising from the pages, although on one occasion, they turned out to be actual flames, because a classmate had set fire to the bottom of my paper (if you’re reading this, Gerard Martin, you’re still a bollocks).

Our English teacher now was Mr Flanagan, who liked my essays too. Yet I could tell that there  was something about them that worried him.

And one day after the Mocks, he laid my work out and said it was well written, and structured, and all that: “But it’s too short”.

I looked at it, hurt. It was a paragraph shy of two foolscap pages. Whereas, he explained, now citing the example of classmates as something I needed to follow, “you’re expected to write five”. This would affect my grade unless rectified, he warned.

I’m sure I tried, at least. In my second Leaving Cert English exam, I dragged the essay out to nearly three pages, with some padding and unnecessary adjectives. For that and the rest, I got a Grade C. It felt worse than the D.

Many years later, in another century, this paper asked several ageing reporters to sit a Leaving Cert exam of their choice, for a features series. I was one, and was very tempted to try English again and see if I could finally vindicate Mr O’Brien. But I chickened out.

Fearing history would repeat itself, I played it safe and repeated history.

3 Oprah with Meghan and Harry: One by one the bombshells drop

4 ‘Do I have to do everything around here?’ Irish women and the ‘invisible job’